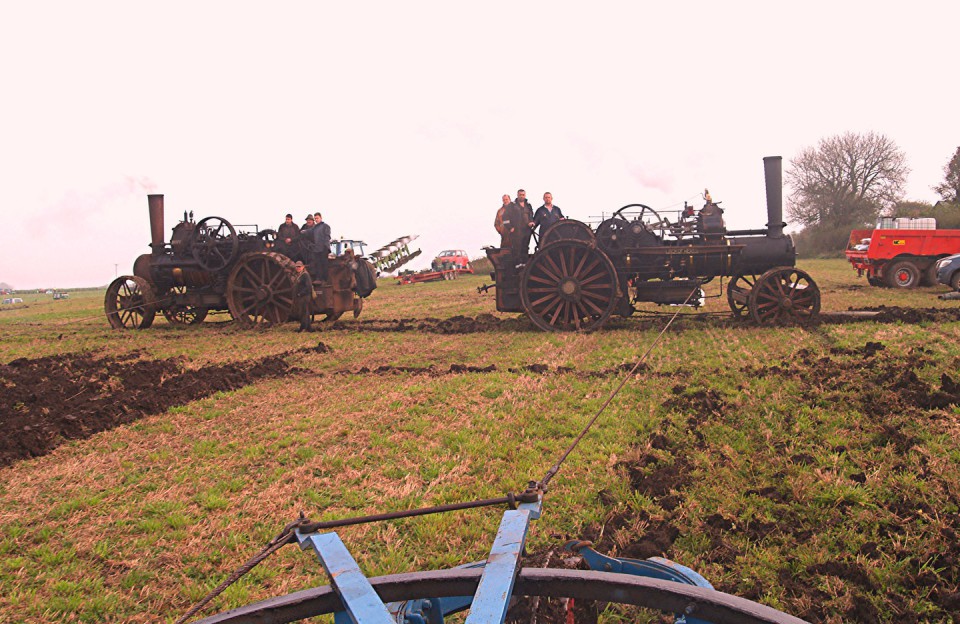 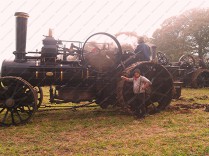 Brian Snelgar and Andrew Melrose are Wiltshire and Somerset’s men of steam ploughing respectively.  I have known Brian and Andrew and their team for many years.

Andrew Melrose owns plough engine Margaret.  A few years ago I steered the massive engine around the plough field courtesy of

Richard and Dan who often drive the engine.  They invited me on board Margaret for some pictures and we ended up driving across the plough field to set up the plough.

Plough engines have a strange system, where the wheel is turned the opposite way, to the turning of the front wheels.  You can also be quite easily thrown from the engine when it jerks.

Fowler "Margaret" Built 1870, No 1368 Reg No AL 8468 12nhp.  One of the Beeby Brothers fleet of steam ploughing engines from Rempstone.  It was re-boilered in 1920.  The engine is now owned by Andrew Melrose who has carried out extensive restoration works, including taking part in the television programme The Salvage Squad in 2002.

Fowler BB1 Ploughing engine 16NHP No 1346, Princess Mary.  Built 1920 supplied new to WG Fairhead, Peldon Essex and bought by the present owners M & B Snelgar in 2007.  An extensive restoration is on going on.

Other engines I have photographed.

Fowler BB1 Ploughing engine 14NHP works no 15529, Built 1920 weight 20 tons.  Kept by Fowlers as a demonstrator, moved to the Rivers Catchment Authority with a sister engine, for reservoir construction work, then as an emergency winder for Baggeridge Colliery Dudley, her sister engine going back to Radstock and later scrapped.

After WW2 she was used for dredging by JB Carr until the 1960’s.  It has been recently discovered that this engine had worked as a pair, with Princess Mary No 1346.  They have now been teamed up on occasions and nicknamed the 'Green Team;.  Brought into preservation by Charles Roads then to David Hicks, rebuilt by current owners.  Owned by Steve Gunn, Westhay Somerset.

Fowler BB1 Diesel Conversion Ploughing engine.  No 15199 Built 1918 Reg No AL8510, supplied as a pair with sister engine no 15198 to Beeby Brothers of Rempstone, near Loughborough, becoming their set number 11.  They worked as a steam set until 1950 when they were converted to Diesel power, being fitted with Mercedes power units in 1951.  They continued to work with this power until 1963, when they were taken out of use and purchased at auction in 1988.
Owned by Basil Gibbons Hook Hants