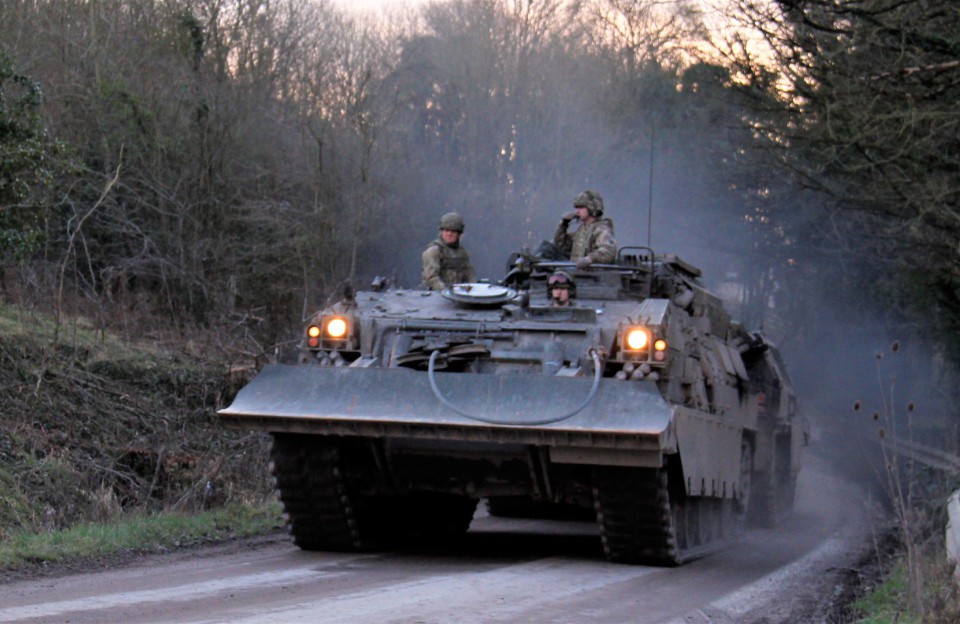 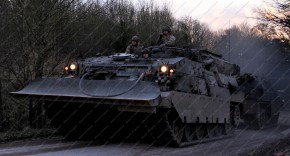 KRH rescue their other Crarrv which was on transit during the exercise and blocks the bridge.

Copehill Down is a Ministry of Defence training facility near Chitterne on Salisbury Plain, Wiltshire, England. It is a 'FIBUA' (Fighting In Built Up Areas) urban warfare and close quarters battle training centre, where exercises and tests are conducted.

The site lies in open ground in the northeast of Chitterne parish, between Chitterne and Tilshead.

The facility was built in 1987 to resemble a German village in Bavaria, to provide troops with a simulated backdrop when training for operations in European theatres including the Cold War, the Balkans and Northern Ireland.

The facility includes a shanty town made up of cargo containers stacked and laid out in rows of tightly packed streets, to provide an additional training area that more closely resembles the Army's operational theatres in Operation Herrick and Operation Telic.

Non-combat access to Copehill Down is generally restricted, however the facility has been used for airsoft wargaming and by historical reenactment societies, which take part in private reenactments of battles. 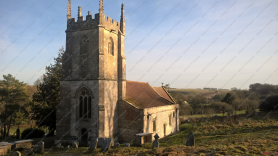 A small village in Wiltshire called Imber is famously known as the ‘Ghost village’ of the Second World War. During World War II.  Imber residents were evicted with just 47 days notice during World War II, it was then turned into a military facility where soldiers received training for the D-Day landings in Normandy.

Before WWII broke out, Imber’s community consisted of 170 residents. The government had started buying land around the village for a while before, and in the year 1940, the small community of Imber was asked to look for new houses and jobs elsewhere, leaving their village forever. Most of the town was then turned into a military training facility. Soldiers needed intense training prior to the Normandy invasion, due to the crucial nature of the campaign. Training soldiers before the actual invasion turned out to be a wise decision. The Normandy invasion enabled the Allied forces to hit deep into Nazi-controlled territory, eventually forcing them to retreat from France and Belgium.

The training area of Imber was also used later by the Ministry of Defence to train troops operating in Northern Ireland during the IRA crisis. In Northern Ireland, the British army faced a different sort of warfare, which was novel to most of the soldiers. At Imber, soldiers were trained in patrolling a residential area and manoeuvring in case of an ambush or a sniper attack.

The residents of Imber did not resist the military’s orders to move, primarily because they thought they were doing a service for their country at war. Initially, they thought that after the war they were going to come back, but they were never given permission to return.

It was never handed back and to this day remains a training ground for urban warfare. It is open to the public only on selected days. The only residents allowed back are those who have died, to be buried there in the church graveyard.

The following is a copy of the letter sent to tenants to vacate:

Arising out of the decision that increased training facilities are to be made available in the Imber area, I regret to inform you that it is necessary to evacuate the major part of the Department's Imber Estate, including your dwelling.

To this end I enclose you formal notice to quit. The area has to be evacuated and made available for training by Dec 17th. In this connection you will note that the formal notice to quit expires on and it is confirmed that there will be no objection, if it assists you, to your remaining in your dwelling as tenant on sufferance until a date not later than Dec 17th 1943.

It is appreciated that apart from the distress the move will cause you, it must inevitably occasion direct expense for which you have no legal redress against the Department. It is however, desired to assist you in this direction as far as is practicable and equitable, and I am directed to state that the Department is prepared in principle but without prejudice to refund to you reasonable expenses incurred by you in respect of the removal of your furniture to your new home, and the travelling expenses thereto of yourself and members of your family at present living with you. In addition, if you are so unfortunate as not to be able to find alternative accommodation, and it is necessary to remove your furniture to store, the Department will refund the cost of removal to store and reasonable storage charges until you can find another house, or until the Imber area is again open for occupation, whichever is the earlier.

Further the Department is prepared if you so desire to take over from you by valuation, any produce in your garden which you are unable to harvest and take with you, and I shall be glad if you will let me have as soon as possible any claim you wish to make under this head.

Perhaps the most fascinating feature at Imber is this purpose-bult military training area, with simple rectangular houses for training troops in house to house combat. The Uran Warfare units were used to prepare troops for combat in places like Northern Ireland, Kosovo, and Afghanistan.

‘Imberbus’ service running from Warminster to the lost village of Imber

THE annual heritage ‘Imberbus’ service running from Warminster to the lost village of Imber and other isolated locations on Salisbury Plain, Wiltshire makes a return in August each year to raise funds for charity.

Imber village, in the middle of Salisbury Plain, was evacuated in 1943 by the Army to allow it to be used as a training area in advance of D-Day.

Other than a few days each year, Imber village has been out of bounds to the public ever since.  The 16th century St Giles's Church, looked after by volunteers with the Churches Conservation Trust, remains and is well worth a visit.

This most unusual bus service across the Plain not only allows people to get a fascinating and rare glimpse of Imber, it allows a day out visiting Tilshead, Chitterne and the Lavingtons where you can eat and drink in village halls and country pubs.  There’s nothing quite like traversing Salisbury Plain from the top of a red double decker bus.

The use of a combination of historic red London double-deck Routemaster buses and the newer, but no less iconic, wheelchair accessible New Routemasters to take visitors along the route.

The Imberbus event was first run in 2009 as a one-off, however it proved so popular that it has been run every year since then, as it continues to attract lots of attention as well as helping raise money for charity.

It  recently raised £13,000 which was split between the Friends of St Giles’s Church and the Royal British Legion.

Beside the urban warfare units a paved road leads uphill to St Giles Church. The church dates to at least the 13th century, and stands on the site of an earlier Norman church. The super Perpendicular west tower was added in the 15th century. The most interesting feature is a series of medieval wall paintings, including the Weighing of Souls, and the Seven Deadly Sins. On unusual highlight is a painted mural under the tower depicting plain changes for bell-ringers. Think of them as a musical score for bell-ringers. The pain changes mural dates to 1692 and is thought to be the oldest in England. St Giles is a wonderful medieval church and is worth worth a trip to explore on open days. One day in the year it is sure to be open is the closest Sunday to St Giles's Day.

Immediately east of The Bell a signposted trail leads across the grass to an overgrown fenced area to the cemetery for the Baptist chapel. The chapel itself stood further up the slope, but was pulled down in the 1970s. Though the cemetery is overgrown, you can wander about and view quite a number of old gravestones. You can also get a very good view of the nearby council houses.

Over half of Imber's residents belonged to the Baptist movement. Until 1833 they had to worship in local houses, but in that year a new chapel was built, for a total cost of Â£238. In 1858 a school was attached to the chapel. The school had an attendance of twice the Church of England school. It eventually closed in 1895 when state-funded education became the norm.

This building was  a pub known as The Bell.

The next place to see two large council houses, erected in 1938, just 5 years before the village was deserted. There were originally 8 council houses, but 6 of these were pulled down by the military.

If you carry on east past St Giles Church you will see the Nag's Head Cottages on the opposite side of the road. This set of two semi-detached cottages take their names from the former Nag's Head pub which formerly occupied the property. Records are scanty, but the pub seems to have closed in the early 19th century, and the cottages were used as dwellings after that time.

On the opposite side of the main road from the Bell Inn and the Baptist cemetery you will find high stone walls enclosing Imber Court, a beautiful 17th century manor house, rebuilt in the 18th century. The Court was damaged by fire in 1920 and restored. It was built by the Wadman family, lords of the manor during the 17th and 18th centuries. When the Wadman's sold the Court it was used as an academy for young gentlemen before the Dean family took ownership. The Dean's were lords of the manor throughout the 19th century and owned 3 local farms.

Nothing now remains of the Court's gardens and lawns, and barbed wire along the stone wall belies the elegance of the historic buildings beyond. You can still see traces of an avenue of trees leading to the dog kennels. A lane runs past the Court towards Imber Court Farm, but the lane is closed to visitors.

Seagrams Farm This is one of only six of the remaining original buildings that remain in the village of Imber. The rest of the buildings were destroyed by the Army in the years following their takeover in 1943. Segrams farm has the date 1880 above the door. 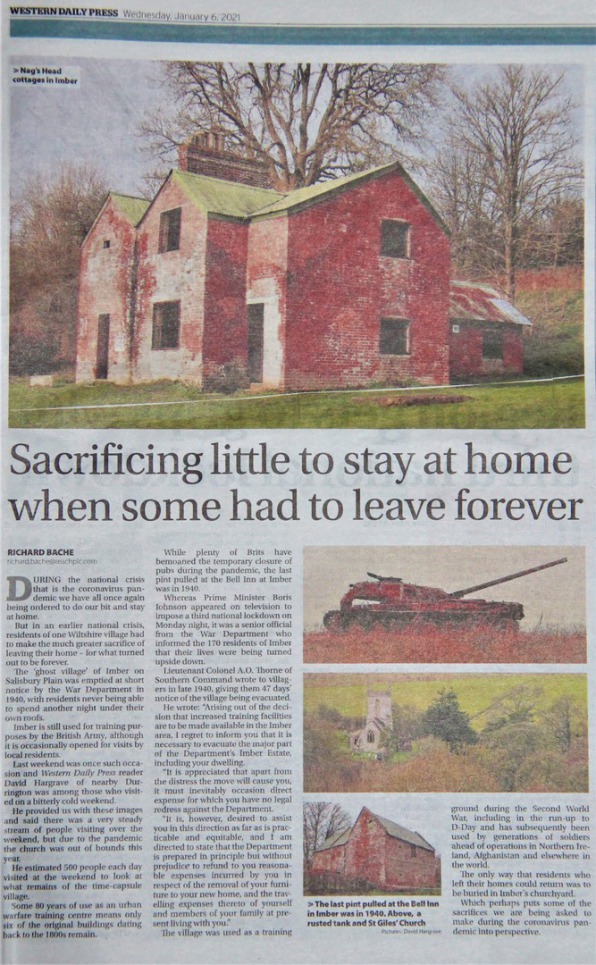 Print | Sitemap
This website and its content is copyright of DCRH - © DCRH 2021. All rights reserved. Any redistribution or reproduction of part or all of the contents in any form is prohibited other than the following: • you may print or download to a local hard disk extracts for your personal and non- commercial use only • you may copy the content to individual third parties for their personal use, but only if you acknowledge the website as the source of the material. You may not, except with our express written permission, distribute or commercially exploit the content. Nor may you transmit it or store it in any other website or other form of electronic retrieval system.
Login