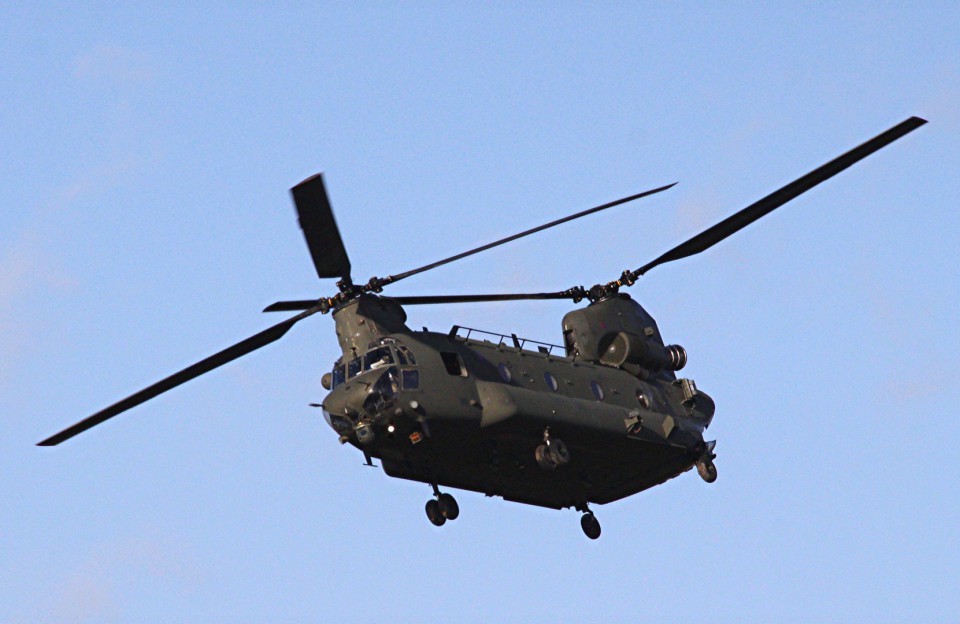 These photographs were taken  this week  in various places on Salisbury Plain as several military regimental units resume training and  a combined major armoured exercise. 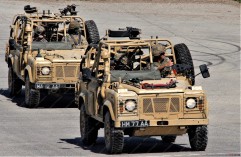 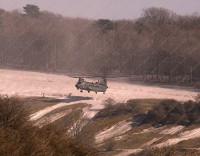 This photograph shows a Chinook on a training mission on Salisbury Plain.

During this training they often can be seen sat on a hillside with the tailgate lowered, as they would do in a hostile environment allowing the troops etc on board to exit onto the hill without the helicopter landing.

The Chinook has an incredible carrying capacity of 33-55 troops or 26,000 pounds of cargo.  The helicopter comes equipped with a triple hook system, allowing it to carry large internal or multiple external payloads.

The current CH-47F/MH-47G modernization programs will ensure this tandem rotor helicopter remains in the Army fleet through the 2030s. 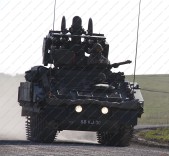 The tracked Stormer vehicle provides a mobile platform for the Starstreak High Velocity Missile (HVM) system giving the detachment protection and excellent mobility with eight ready to fire missiles and a further nine stowed inside.

The HVM system is a low-level Close Air Defence system with a rapid engagement capacity optimised to counter the attack helicopter threat. This highly flexible system is also capable of being fired using the lightweight multiple launcher or from the shoulder. The missile employs a system of three dart type projectiles which can make multiple hits on the target. Each of these darts has an explosive warhead.

The system is fitted with a roof-mounted air defence alerting device, providing target detection and prioritisation. A panoramic weapon sight is located at the front of the vehicle.

The missile, which travels at more than three times the speed of sound, uses a system of three dart-like projectiles, allowing multiple hits on the target. HVM can be fired from the shoulder, from a lightweight multiple launcher or from the Stormer armoured vehicle. 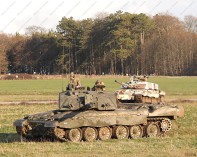 A series of photographs taken during the course of the week out on Salisbury Plain with the Royal Tank Regiment. 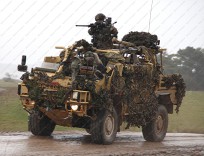 Photographs taken during the Wessex Storm exercise on Salisbury Plain. 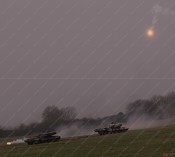 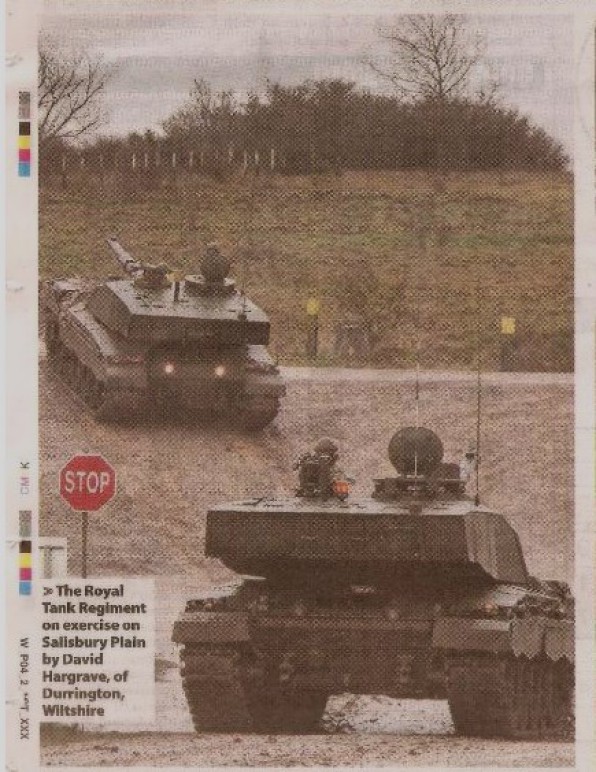 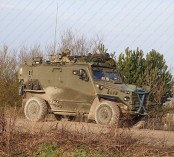 The Foxhound is at the cutting edge of protected patrol vehicle technology and provides unprecedented levels of blast protection for its size and weight. These patrol vehicles underwent final testing in the dusty and hot conditions of the Helmand desert before being deployed on operations.

Foxhound has been specifically designed and built in Britain to protect against the threats faced by troops in Afghanistan. However, this is an agile and versatile vehicle that will be a mainstay in the Army for years to come.

Being lighter and smaller than other protected vehicles such as Mastiff and Ridgeback, Foxhound brings a whole new capability to the Army and is ideal for soldiers operating in mentoring and partnering roles.

Foxhound has a top speed of 70 mph but can still protect against improvised explosive devices thanks to its v-shaped hull. 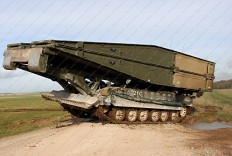 Titan is an armoured engineer vehicle designed to enable troops and vehicles to cross gaps of up to 60 metres by laying a selection of close support bridges. Along with Trojan it gives a common heavy armour fleet based on the Challenger 2 Main Battle Tank chassis.

Improved visibility is achieved by incorporating direct and indirect vision systems including low light, image intensifying and thermal imaging capabilities. The interior, and to some extent the exterior, of the vehicles
have been designed around the crew station positions.

Titan has the flexibility to support a wide range of operations, including humanitarian missions. 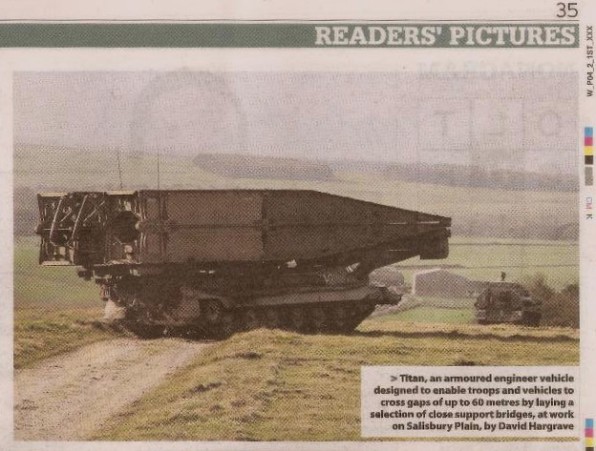 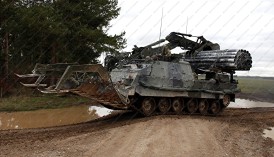 Trojan is an armoured engineer vehicle designed to open routes through complex battlefield obstacles and clear a path through minefields.

Improved visibility is achieved by incorporating direct and indirect vision devices with low-light, image-intensifying and thermal imaging capabilities. The interior, and to some extent the exterior, of the vehicle has been designed around the crew station positions.

Trojan has the flexibility to support a wide range of operations, including humanitarian missions. 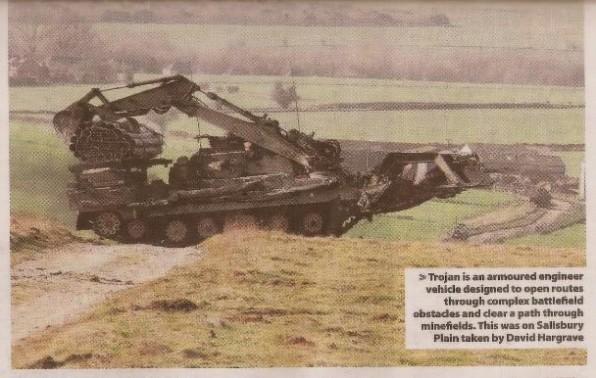 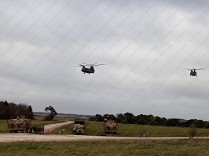 An infantry section training to deal with mines and IED identification etc. 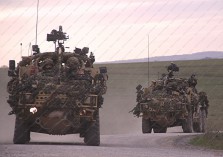 It is designed to protect personnel against roadside explosions and mine attacks (the chassis is heavier than its predecessor to give additional protection). Jackal 2 is armed with a General Purpose Machine Gun for crew protection and can carry either a Heavy Machine Gun or a Grenade Machine Gun as the main weapons system in the fire support role.

The gun ring has been moved forward to give a 360 degree sweep of fire. Jackal 2 is closely related to the new Coyote tactical support vehicle, which is a six-wheel, Jackal-based armoured vehicle.

The Coyote tactical support vehicle, (TSV) light, is based on a 6x6 derivative of the Jackal 2 and supports the go-anywhere, high-mobility Jackals across harsh terrain.

The extra two wheels gives a heavier vehicle, which can act in support of the Jackal 2 to transport supplies and equipment over similar terrain.

The Coyote, which has similar protection systems, armament and propulsion to the Jackal 2, can carry also an extra crew member compared to the original Jackal vehicle. 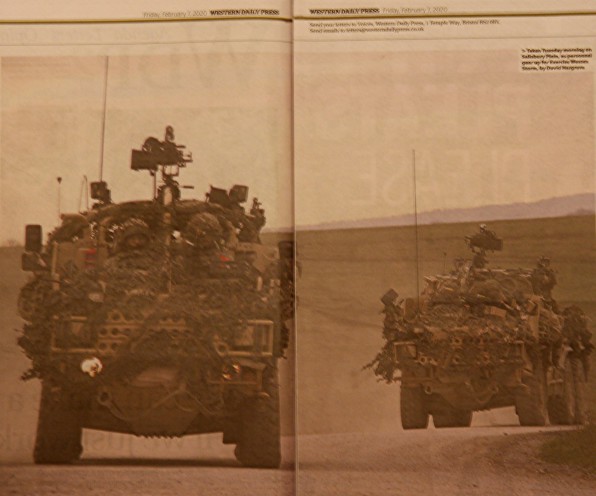 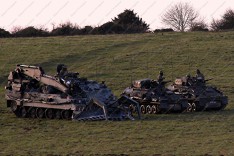 These photographs show 22 Engineers and 26 Engineers.

The Royal Engineer BR-90 family is composed of bridges capable of Close and General Support and the associated wheeled support vehicles.

The bridges are built from interchangeable modular components. Originally designed for Load Class 70 tracked vehicles, the bridges may be crossed by vehicles of up to Load Class 85 under strict safety conditions which accommodates the increase in Load Class of Challenger 2 variants. The bridges have two interconnecting track ways with a 4 meter overall bridge width and 1 meter girder. 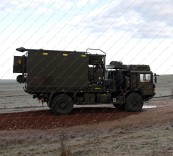 The Royal Artillery deploys on exercise this convoy, seen on the transit route.

Saab’s Giraffe AMB is a truck-mounted 3-D “agile multiple beam” surveillance radar that is housed in a single 6 m/ 20 ft ISO container with splinter and NBC protection, mounted on a cross-country truck.

Its name comes from the Agile Multi-Beam (AMB) 3-D radar that sits on an extensible “neck,” in order to give it broader surveillance coverage with a range of 20-40 km/ 12-24 miles.

The system takes about 10 minutes to set up and activate and 3 minutes for take-down.  Setup can happen at leisure, after all, while take-down may involve enemy aircraft who are moving into anti-radiation missile range. 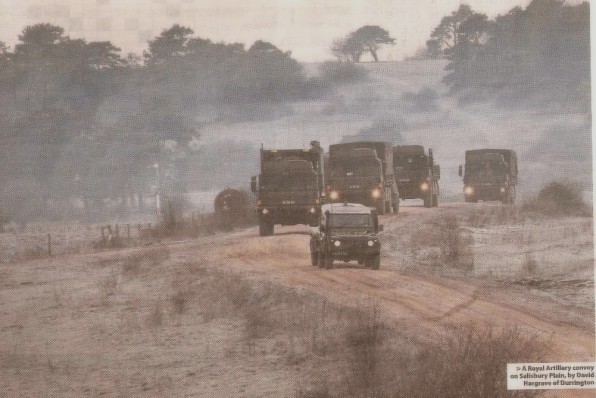 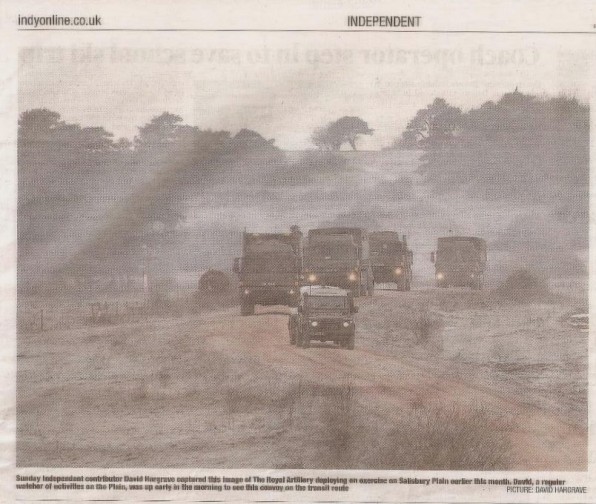 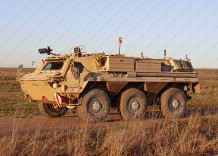 I was out on the Plain today knowing there was going to be some vehicle movements, as vehicles returned to their home base.  I did manage to see the vehicles when they deployed in cold, crisp, sunny weather on Monday.

However, unlike the weather earlier this week, today was beset by thick fog with very little visibility, also unfortunately I was in the position of meeting these vehicles on the Transit Route.  Fortunately  we were all travelling with lights on and it was on a part of the route that is quite wide and smooth.

With some hand waving etc we passed each other with no problems at all.  I can imagine the poor visibility the personnel would have encountered, enclosed in these machines.

These vehicles from Falcon Squadron, The Royal Tank Regiment, in their operation exercise this week.

The unit of air tight armoured vehicles, designed to scout ahead of troops to find and identify potential chemical, biological or nuclear hazards on the battlefield.

The squadron’s eight German-built Fuchs chemical, biological, radiological and nuclear (CBRN) reconnaissance vehicles use probes to take and analyse suspect samples with a built-in mass spectrometer.  Crew then feed back their discovery by secure link to scientists at the Ministry of Defence’s top secret Porton Down laboratories.

The vehicles, which are attached to 22 Engineer Regiment, are air tight and pressurised inside so that toxic chemicals cannot seep in.  The four crew can stay inside for up to six days if necessary, going to the lavatory in plastic bags. 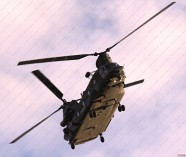 RAF Lakenheath in Suffolk, this week provided US military aircraft, including F-15 fighter jets based at the 48th Fighter Wing.

Indeed it was only during a break in the low cloud and heavy rain that they were visible, this was mainly on Wednesday, still at considerable height in very strong winds.

Lakenheath  exercises such as we heard on Salisbury Plain this week, are crucial to provide both aircrew and support personnel stationed at RAF Lakenheath the experience needed to maintain a ready force capable of ensuring the collective defence of the Nato alliance.

The airmen assigned to RAF Lakenheath are prepared to fly in the defence of our nation, the United Kingdom and our shared allies 24 hours a day, seven days a week.

Training was conducted in accordance with Ministry of Defence and UK airspace regulations.

Non of these were seen but certainly heard for several hours during the daylight hours.

On Monday Osprey helicopters from Mildenhall were seen flying low by the village.

The rest of the week Wild Cat Helicopters and Chinooks were spotted carrying out landings etc out on the plain, but only seen on the Wednesday when there was a break in the weather.

Print | Sitemap
This website and its content is copyright of DCRH - © DCRH 2020. All rights reserved. Any redistribution or reproduction of part or all of the contents in any form is prohibited other than the following: • you may print or download to a local hard disk extracts for your personal and non- commercial use only • you may copy the content to individual third parties for their personal use, but only if you acknowledge the website as the source of the material. You may not, except with our express written permission, distribute or commercially exploit the content. Nor may you transmit it or store it in any other website or other form of electronic retrieval system.
Login