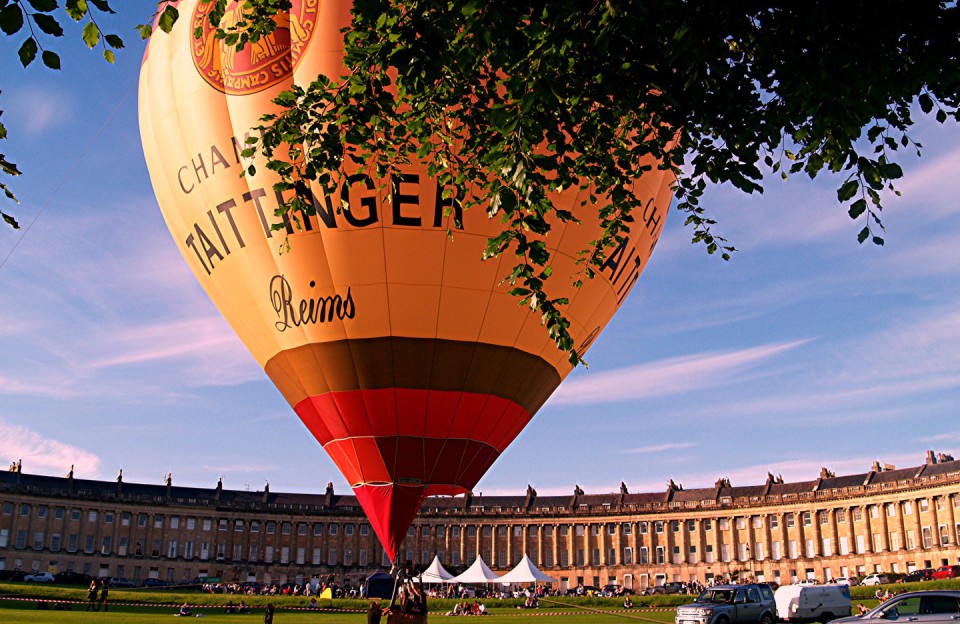 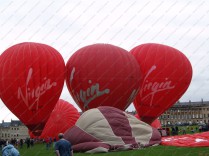 9 Virgin Balloons & 1 Roman Bath Balloon launch from the front of the Royal Crescent
Western Daily Press - Sept 2007 - David Hargrave
Mark Simmons who runs Hot Skies Ltd and flies from Bath regularly, arranged for the Virgin balloon empire to bring along 9 of their passenger carrying balloons and David Littlewood along with Ray Shortall crewed David's Roman Bath Balloon.
This provided a spectacle to see all these balloons inflated and an attempt made to fly them all out of the Crescent front lawn.  Not only did these balloons gather on the area, but some 135 passenger had been brought to the site as well from all over the Country.  Initially it looked like nothing would be able to launch due to strong winds gusting across the site but eventually the winds did drop.
Eventually all the balloons became airborne and they headed off east across the City making quite an unusual site and what could have been a record. 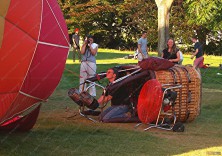 250 Years of the Royal Crescent Bath
Western Daily Press - Aug 2016 - David Hargrave
Pete Dalby, Owner of Phoenix Balloons brought along his Champagne Taittinger, Cameron Z105 balloon G-CEKS.  This very colourful balloon is used in the UK as the Flagship of Champagne Taittinger, a family owned champagne house based in Reims.
It was intended to have a demonstration balloon tether and enable some guests and residents from the Royal Crescent, to see at close quarters, what is involved with the Hot Air Balloon world.
The Balloon was set up in the middle of the front lawn of the Royal Crescent in a safe area, allowing the public good views of how it all works.
Unfortunately the gusting wind conditions were not good and it became unsafe to tether as intended.  However, after Pete and his crew waited for some considerable time for the wind to drop, which it did not, the balloon was laid out.  Eventually a test inflation and tether was attempted and the crew struggled for almost an hour to put on a display.  Despite several what looked like a few out of control moments, the idea of doing anything else was abandoned.
The crowds were entertained and were able to see the hard work involved with tethering a balloon, which is totally different to a normal launch and flight. 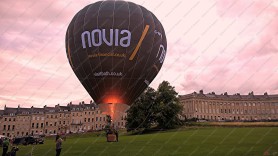 Novia Financial, Visit Bath and Bath Balloons team up for Balloon launch
Western Daily Press - Aug 2017 - David Hargrave
Novia Financial and Visit Bath teamed up with Bath Balloons to launch a new balloon to fly the skies of Bath and surrounding areas.
Operated by Bath Balloons its inaugural flight was planned for August, with the launch due to take place outside the Royal Crescent Hotel.  Due to adverse weather conditions the balloon was tethered for the event and the balloon eventually made its inaugral flight from the Bristol International Balloon Fiesta 2017. 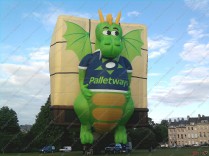 The Palletways Dragon hot air balloon launched from the Royal Crescent to mark the the start of the 2010 Bristol International Balloon Fiesta.

The traditional wicker four-man basket has a completely transparent glass floor which provides passengers with views of the scenery below.  The basket carries up to two passengers and two pilots who stand on two-inch thick glass. 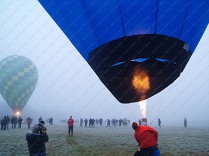 43rd Annual International Icicle Balloon Meet - 3rd and 4th January 2015.
Western Daily Press - Jan 2015 - David Hargrave
Thick fog and minus 3 saw the start of Sunday at a new venue, Folly Dog Leg, Hungerford just north of the town centre.
The Icicle Meet is informal, unsponsored and open to all balloonists, many of the crews attended the event, as usual from across the south of England.
Saturday was all but washed out due to gale force winds and heavy rain, but on Sunday the event was blessed with little wind and temperatures well below freezing.  The only problem was the thick persistent fog in the area, this made flying a no go, although several crews did inflate and tether to entertain the large crowds.
Andrew Collett even brought along his new balloon G-CILO never seen before and straight from the factory, it was an ideal opportunity to get it out of the bag and do some test inflation. 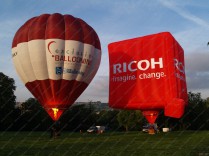 Maiden Flight of Ricoh Europe - the 'Imagine Change' balloon.
Western Daily Press - Sept 2012 - David Hargrave
The balloon enjoyed its maiden flight from the Royal Victoria Park, Bath.
The square balloon is 105,000 cubic feet in volume and has a smaller square on one corner replicating the Ricoh branding.