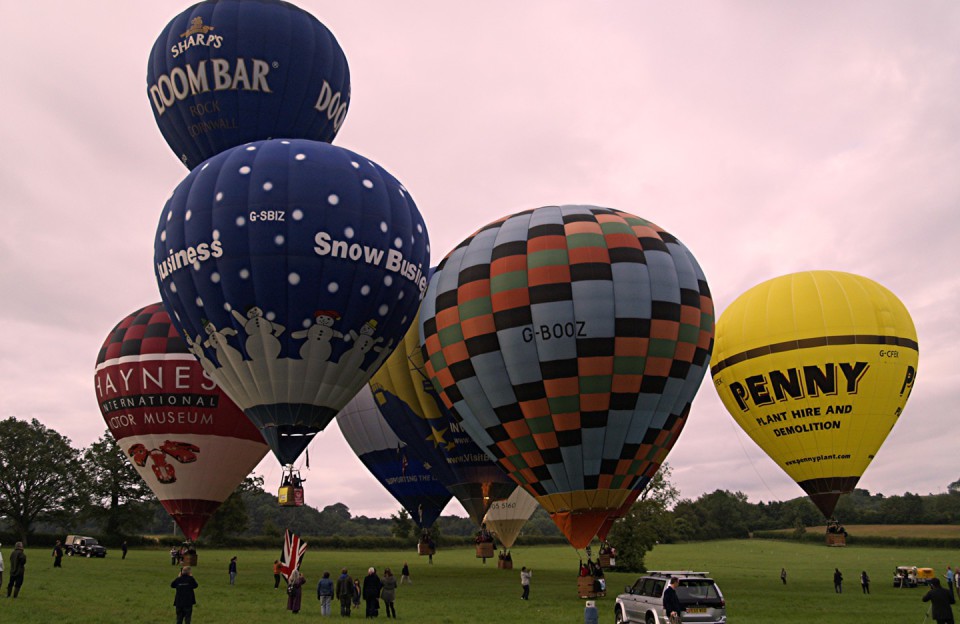 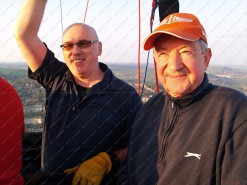 Record breaking balloonist Brian Jones was in the air over Bath this week, helping to put a new balloon through its paces.  Mr Jones, who was recently awarded the MBE, checked out the new Muller - Wiseman Dairies balloon on a flight from Royal Victoria Park, Bath.

The Bristol  born pilot made history in 1999 when he and Swiss co-pilot Bertrand Piccard made the first ever round-the-world voyage in a hot air balloon.

The new balloon had been brought down from its base in Scotland for the routine airworthiness test flight ahead of a visit to the Muller factory in Shropshire.
The balloon is owned and flown by Graeme Houston of the Scott Air Balloon Company, who also works as a safari pilot in Africa.

David Hargrave, who works with Bath and North East Somerset Council in liaising with balloonists, said: 'It was a wonderful evening for flying, but with a slightly unpredictable wind near the ground.  This is known as a sea breeze and is a common happening around the Bath basin.'

Mr Jones was assessing Mr Houston on the test flight which all commercial pilots have to complete on a regular basis as part of their licence requirements.

There were four trained pilots in the basket.  Mr Hargrave said: 'To fly with the four pilots as you can imagine was a great pleasure for me and something I am unlikely ever to do again.  We had a very enjoyable flight with no mishaps or moments, other than some turbulence a couple of times.'

Other balloons were also up on the night, mostly heading south.  Mr Hargrave said their lofty vantage point allowed them to appreciate the damage done by bad weather to agricultural land.  He said: 'The majority of arable fields would normally be starting to grow but still have got large bare areas and look really poor.' 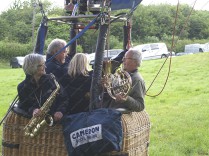 This was organised by the Western Region British Balloon & Airship Club (WRBBAC).  Approximately 10  balloons launched from Sutton Farm.  What was unique, was the fact that an orchestra was playing in the balloons whilst conducted by a famous conductor, Charles Hazelwood.  This was accompanied by a choir of 22 singing as the balloons launched.

The Points West BBC covered the event for the local news. 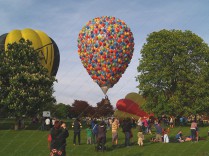 The world famous Disney Pixar UP balloon was made in England and took six months to build.  It has an active volume of 84,000 cubic feet and has 540 individually sewn balloons, each with 13 panels, attached to the digitally printed envelope.

The balloon was built to promote the film UP which became the first ever animated feature film to open the Cannes film festival and went on to win an Oscar for its director Pete Docter.
Several other balloons filled the park almost to capacity for the evening, giving tourists and residents a very good evenings free entertainment. 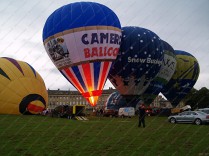 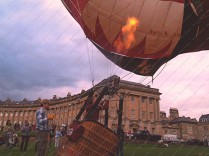 This was the scene at the Royal Crescent, as the Western Region British Balloon & Airship Club (WRBBAC) fly out took place.  Other balloons flew from the Royal Victoria Park and from other parks around the City.

There were tricky wind conditions as the Saturday evening launches took place.  The wind speed varied from almost nil to strong gusts with directional wind changes at different heights.
The evening included a flight by Pilot Under Training Ollie Evans, under the watchful eye of Virgin Balloon Pilot Richard Allen.  Ollie Evans of course, is the son of Chief Pilot for Bath Balloons Mike Evans.  Ollie was joined in the skies over Bath by his Father Mike, flying across to the Royal Crescent from the Royal Victoria Park just after Ollie's perfect launch and they could be seen flying side by side!!  A wonderful sight.