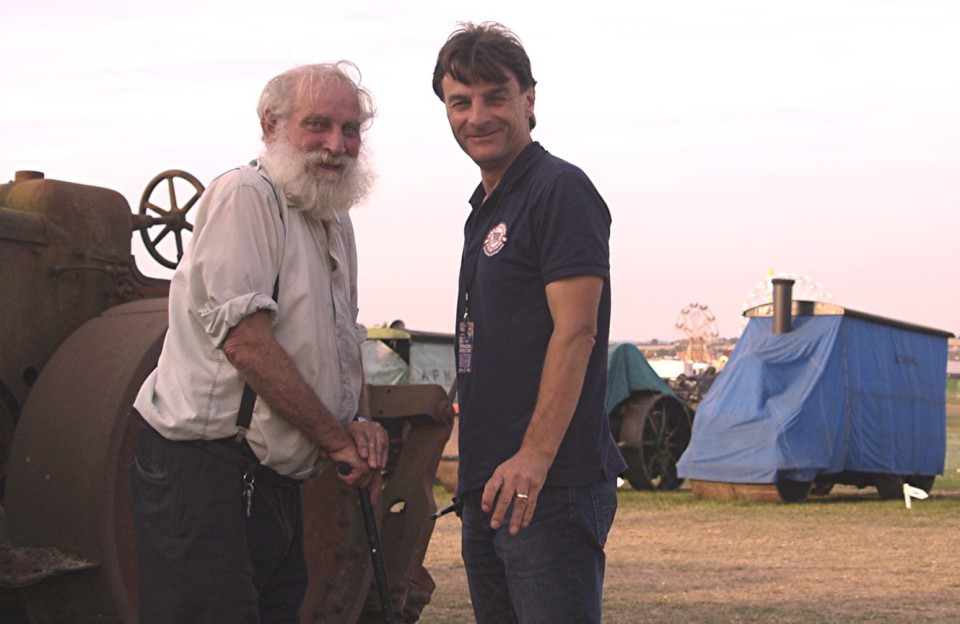 This page is dedicated to characters I have met at GDSF.

The Unsung Heroes behind the scenes of GDSF

They are always happy and always have a 'good morning' for you, no matter how early or late in the day.  I took the opportunity to take a photograph and they were only to pleased to take a minute or two out for a group photograph.

They will have delivered around 400 tonnes of coal by the time the show ends.  All this coal is hand carried around to each engine and the lorries have to negotiate the roads etc around the site.

The army may march on its stomach but the steam engines definately march on their coal and water!!

The water bowsers are also out and about all day with the thousands of gallons of water needed to generate the steam.

These guys really are 'Characters of GDSF'! 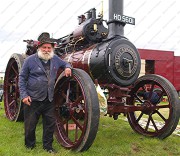 I was very privileged to have known John for several years.  Thousands of steam fans and steam engine owners etc will always remember John with a smile, at The Great Dorset Steam Fair as well as many other venues, when The Crowman and Dr Buskers Dorset R.A.T.S visited and provided rawcuss entertainment over the years.  John spent many years entertaining the crowds in the real ale tent and some of his antics,  with Split Pin and Dr Busker and the other Dorset R.A.T.S, drew immense crowds at events.  John was quite a shy chap at times, although when he got on stage, look out for the antics and bawdy singing.

John was an unmistakable figure even in the character filled world of steam.  The splendidly bearded John had missed just one Great Dorset Steam Fair, the first, and not even his delicate health after a stroke kept him away.  Several years ago John was a familiar figure in the wood-sawing arena, in his signature battered top hat.

It was John 'The Crowman',  who had walked in front of the Showman’s engine Quo Vadis in the pouring rain, at Martin Oliver’s late Father, Michael Oliver’s funeral,  waving the Red flag despite his difficulty walking very far.  This was something he had wanted to do, as he had only missed one Dorset Steam Fair and he felt it was his duty to honour the late Michael Oliver.

John says how it all started

"I first got involved with steam when I went to a steam display and someone said, 'where are your  overalls? We need some help'.  I had the overalls with me and that was that," he recalls.  It is true of many at the show, who began as spectators at some rally or display and were seduced by the power and performance of the great machines.

I can recall years ago when John was active enough to be present in the working area at steam rallies working with the  steam powered saw bench crew.  He was also an exceptional sketch artist and he had many sketch drawings of steam traction engines and other steam vehicles.  John had a stall at Dorset steam Fair where he sold many of his excellent drawings.

I spent many times over the years whilst at Dorset Steam Fair, with John, listening to his stories and he always had the kettle handy, so it made a welcome rest stop on site!  He had been a family friend for several years and was always pleased to see me and hear from the Family.  I was even privileged to get many pictures of him, something a lot of photographers will tell you is not easy.  I even caught him out a few years ago when I managed to get a picture of him with Martin Oliver one evening,  before the Steam Fair opened.  John was minus his famous top hat!  John was not amused and asked me not to send this to the press.  Well of course I took on board what he said, but I still sent it to the press!  Sorry John but it was such a natural sight.

GDSF 2016 was the last show John attended, with his relatives kindly driving him to Dorset and looking after him on site.  I was able to see him on stage at the Fair and I was able to speak to him during the interval.  He told me while I was speaking to him,  he just wanted to get there at all costs and his family rallied round and brought him down to the Fair.  John was by then in a wheelchair and suffering, but the show went on, the crowds were immense, chanting and cheering his brave efforts to still be there.  Martin and Sarah Oliver also helped out by allowing him to be on site near to the real Ale Tent, so he could get to the stage to entertain, which is what he wanted to do, knowing it would be for the last time.

John had suffered from a bad chest for several years and did visit hospital on several occasions.  In  2015 he only came out of Hospital 3 days before GDSF but this did not stop him getting to the event and appearing on stage.  His health took a turn for the worse during 2016 when he was diagnosed with cancer and despite several bouts of treatment he passed away.