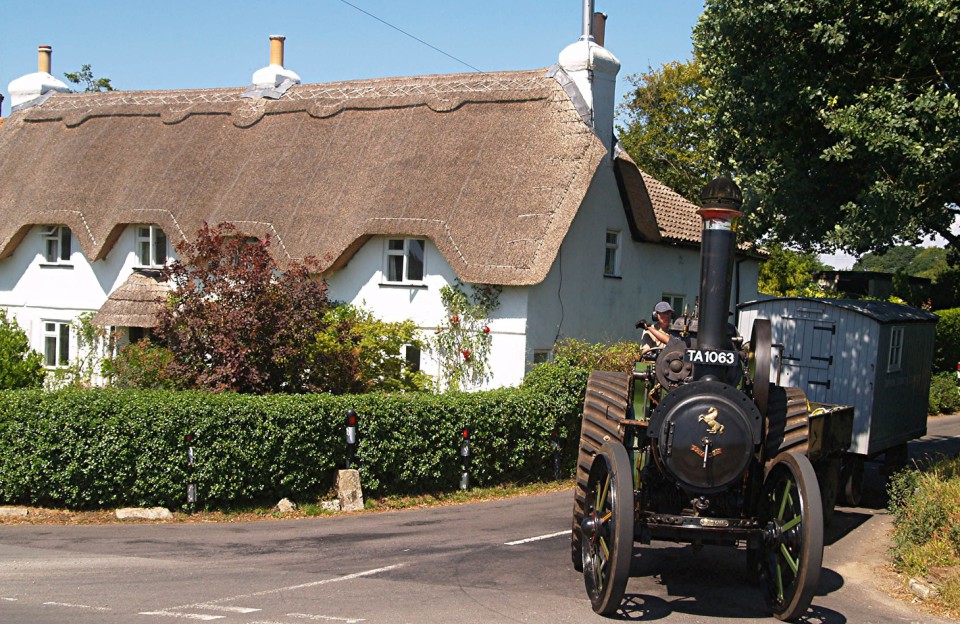 On my travels with the engines going to GDSF 2018 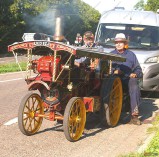 On the Road with Frederick, the much travelled 1/3rd sized showman’s engine and his 120 mile Miniature Road Run to GDSF - 21.08.18

I managed to catch up with this intrepid expedition this afternoon on the A354 Blandford road.  It is  looking like they are going to make it on time.

Frederick, the much travelled 1/3rd sized showman’s engine, is travelling 120 miles to the Great Dorset Steam Fair and raising money for Parkinson’s UK.

The 120 miles will be covered over three days, they started in St Albans on Sunday.  They stopped near Windsor on the first night and then Sutton Scotney on the second, before finishing at Tarrant Hinton on Tuesday evening.

Anyone who would like to support them with this run will be most welcome.  Please see link below for their just giving page, lets reach the £10,000 they are hoping to raise:

Well done to this team. 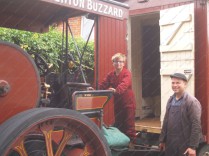 Two days on the road to Dorset.

Built as No 3555 and delivered new to Taylor Brothers Amusements of Workington in March 1914, it was apparently transported by rail from the Burrell works to Grange station.  Records indicate that it was delivered without twisted brass fittings or a dynamo but in the event its showman’s career was postponed, as almost immediately it arrived in Cumbria the Burrell was commandeered for war work.  It was used mainly for timber haulage at Thirsk & Elizah Charnley’s Town End Sawmills at Ulverston and may well have been used on agricultural duties around Windermere and Ambleside. It was not until after the war ended that the engine was returned to Taylor Brothers for its amusement business.

You will see The Busy Bee with collection tins.  This year Patrick and his crew are raising money in memory of Ottie Uden.  She was the daughter of their much respected local GP, and sadly passed away at the age of 21. The lads roaded to Dorset on The Busy Bee and were collecting donations as they went.  Therefore, if you are passing The Busy Bee, perhaps you could drop some coins in the tins.  It all goes to the Oxford Hospitals charity.
Thank you.

'Hawkes' was built for a local haulage contractor Hawkes Bros. of Churchdown in Gloucestershire. After a number of owners in preservation the engine was bought four years ago and returned to it's home county.  Extensive work has been undertaken over the years and the engine is looking as good as it did the day it left Thetford thanks to the dedication of it's owner.  This engine has just undergone some paintwork restoration and rear wheel work, including new rubber tyres.

This engine travelled via Avebury, Lavington, Tilshead, Shrewton, Berwick St James, to a halt at Stoford.  After the halt it travelled via Wilton, over the racecourse to Stratford Toney to Coombe Bissett and then travelled along the A354 to the GDSF site.

This roller spent most of its working life in Yorkshire, originally tar sprayer, working for Guisley Aireborough District Council.  It was purchased in 1968 by the owners late father, after it had finished its working life in 1964.  It has had several restorations since, which are ongoing.

Tasker Little Giant, Will O' The Wisp Reg. No. AA 2356  no 1424 Built 1910
Owned by John MacDonald Rostherne Cheshire.
This engine travelled from Knutsford in Cheshire to the overnight halt at Coombe Bissett.

The Horsham Traction Engine Company who describe themselves as a 'Group of Friends that share the same interest in steam engines'.

I have included the original photograph - can you spot the difference? 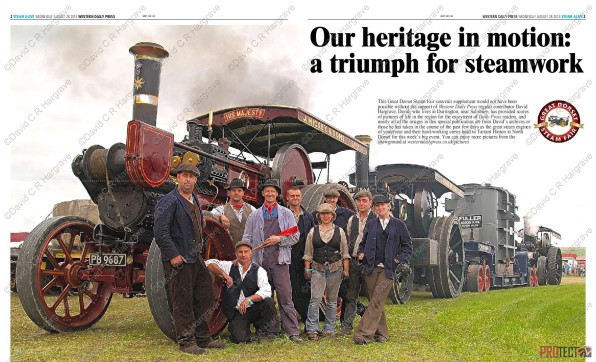 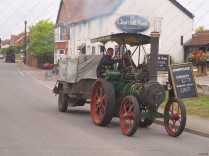 Supplied new to John Heaver of Chichester, who used it in gravel pits for hauling road stone.  Passed into showland on February 28, 1923 with Wools Brothers and subsequently converted to showman’s road locomotive specification, with Burrell parts, the same year.  Finally ended up at Goodeys scrap yard, Twyford, then Hardwicks of West Ewell, then John Evans of Tring (all scrap men).

In 2000 the engine attended as part of the ‘Burrell-themed’ year, in completely derelict condition.  A full restoration has been underway right up until the start of 2016 by owner John White, who has reverted the engine into an ‘as built’ condition example that has just left the factory, right down to every correct nut and bolt and appears as a contractors road locomotive in dark green livery.  An immaculate restoration and ready to steam, having not steamed since 1946.   Following restoration the engine appeared on the Old Glory stand at GDSF in 2016.

It is thought that the engine spent some time in a yard with the Showman’s Engine “Earl Kitchener” and the two engines attended a wedding in Badminton.

A full size replica of one of 3 single cylinder tractors made in 1906.  This engine was built from original works drawings over a 14 year period.  All three original engines were scrapped, although a later built compound version survives.

Both engines arrived at GDSF at around 4pm Saturday. 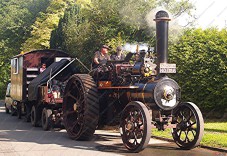 Mercury travelled on the road Saturday to a halt and Sunday it arrived at GDSF at 15.00.

The engine was supplied new to an East Anglian Agricultural contractor.  It spent all its working life in Essex and Suffolk.  It was semi retired in 1948.

Mercury has had several owners until purchased by its present owner in 1985.  It attends almost all its rallies under its own steam and its nothing for it to travel over 300 miles in a season. 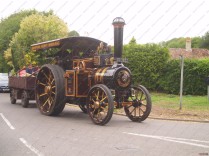 Travelling on the road on Saturday to GDSF was Lord Nelson.

An engine with history that will be at the GDSF,  travelling by road from Bromham, where it was parked after the last rally it attended.  It set off at first light from Bromham, via Tilshead, Shrewton, Berwick St James through Wilton via the A36 and over the racecourse to Coombe Bissett and onto the A354 to Dorset.

It is another engine that I remember being here in the Village of Durrington in Wiltshire and took pictures of it in 1967.  I remember the engine spending time in our Village at James & Crockerell, when undergoing some restoration in the 1960s and it was taken to the Andover Steam traction engine rally in 1967.

It has now been converted to Road Locomotive form several years ago, but apparently it has the ability to be reverted back to showman’s spec with little effort.

Burrell Road Locomotive 'Lord Nelson' - Built: 1913 - Wks No: 3443 - Reg: CO 3822 18.5 tons 8hp.
This engine was supplied new to Anderton & Rowlands Showman of Bristol on 28th February 1913 it worked for them until 1940.  It was sold to S W Coles and also spent some time at the Beaulieu Motor Museum, after Lord Montagu purchased it from H P Corin of Cornwall.
The engine has been totally restored by its present owner Willie Tomlins of Oxford. 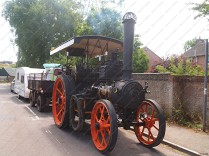 The engine has recently been to Welland and South Cerney, it left the Gloucester steam rally Sunday afternoon and travelled by road towards Dorset.  The crew, Cory McKay and Ben Calder, both from New Zealand, drove John Wakeham's engine via Swindon, Marlborough, Tidworth and Salisbury, arriving  in Coombe Bissett last evening, where it spent the night.

The engine is now in a holding site near to the Tarrent Hinton Site, as the predicted number of 500 steam engines will take some organising on the steam fair site.

'Cracker', built 1917, double crank compound traction engine, 5nhp, Reg No: BS 9066.  This is a compound General Purpose Engine with 3 gears, double drive, winding drum and front tank.  This engine is one of a batch ordered by the Department of Agriculture for food production towards the end of the First World War.

It would seem likely from a date in the first log book that on the 4th January 1918 it was delivered to Mr John Roberts of Gallow Hill, Newtownmountkennedy in County Wicklow for threshing duties.  This engine remained on that farm until 1971 or 1972 when it was purchased by Group Captain C. H. Tighe, OBE., D. F. C. of nearby Ballina Park, Ashford, County Wicklow, for preservation.  Captain Tighe took the engine to events in nearly original condition, selling it to Dennis O'Mahony of Enniskeane, County Cork in June 1974.  Dennis fitted rubber to the front wheels, but concentrated largely on other engines.

The engine was then acquired by John Wakeham of Launceston, Cornwall.  The boiler and firebox were rebuilt and an oversized axle was fitted, along with new bearing surfaces, a skim to the third shaft, new front wheel bearings, steering chains and motion work refurbishment. 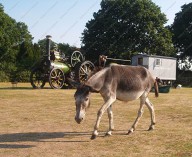 I was fortunate enough to be able to catch up with the crew and their engine Aveling & Porter 4255 Queen Victoria, towing their army trailer and living van and accompanied them to Druscillas Inn at Horton, They had started their journey from near Netley Marsh on Saturday and had stopped over for the night outside the Fighting Cocks Pub in Godshill.

I was able to take photographs on route and even of their Sunday morning visitors!!  Thank you to Douglas and crew for allowing me to accompany you and to capture your journey.

In addition, thank you also for sending me the photographs of Queen Victoria whilst with her previous owners and also the history, which I have added below. 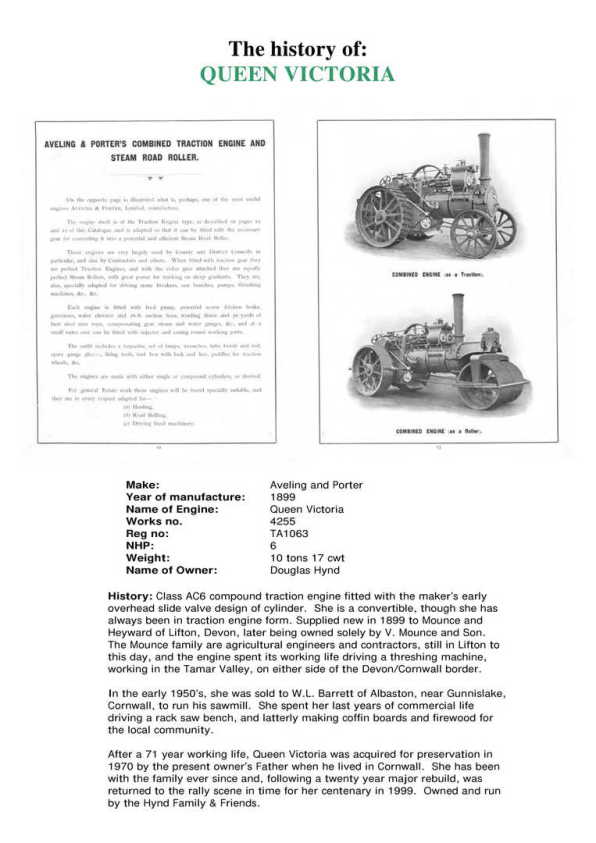