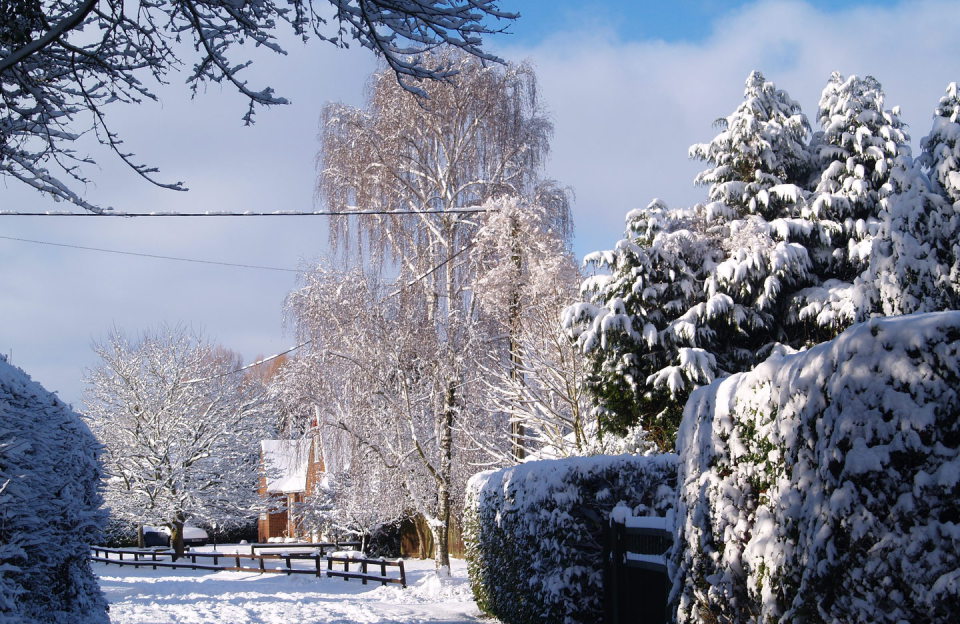 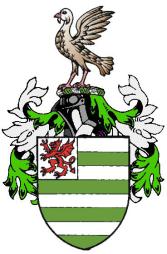 Arms : Barry of eight Argent and Vert on a Canton of the first a Dragon rampant Gules.
Crest : On a Wreath of the Colours a Bustard wings elevated and addorsed proper.

The arms were officially granted on April 5, 1937.

The green and white colours of the arms echo the county's pasture-lands and chalk downs. The stripey field also recalls the arms of the city of Salisbury. The canton bears the dragon badge of Wessex. The crest has the great bustard which is now extinct in England. It is claimed that Wiltshire was its last refuge, but this disputed heraldically by Cambridgeshire. 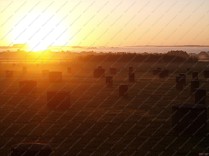 These photographs were taken from 04:40 this morning at Woodhenge in Durrington Walls on Salisbury Plain.

Sunrise here was at 04.51 and was observed in chilly conditions.  You get such spectacular views of the sunrise and also the moon rises across the valley of Durrington and Bulford from behind the clump of trees on Salisbury Plain known as Dumbell Copse.

This morning was a classic sunrise and it took place many minutes before the sun was seen at Stonehenge, as the early morning mist started to clear.

The other photographs show the small Stonehenge built outside the Stonehenge Inn in Durrington.  The Stonehenge Inn commissioned Bliszko Studio to sculpt and erect the Stonehenge replica because many tourists who visited Stonehenge complained about not being allowed to get close to Stonehenge or touch the stones.  People are allowed to climb all over these if they so wish!  It is less than a third as tall as the 13ft original but each stone is shaped like the real ones and the circle aligns with the sun in the same way. 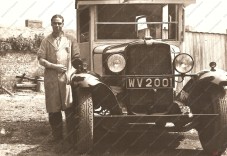 This vehicle's body was originally fitted to a donkey cart until its owner moved over to motorised transport with a model T Ford.  The body was moved for a 2nd time onto this Bedford, after a new engine and chassis was supplied by H Norman  Pitt & Co from Amesbury Wiltshire.  (This later became a hardware shop and is now a factory shop)

Heavers designed, built and fitted the body to the chassis WV2001.  It was kept in storage during the war and later returned to Heavers for refurbishment.

Heavers were a leading company who produced many wood framed and metal bodied vehicles.  They converted lorries, buses and coaches producing some on six wheel chassis.  They supplied over 30 coaches to the Channel Islands where there are still some running today.

They gradually stopped this type of work, when the then technology of aluminium framework and bodies became more common.  This was possibly the downfall of the company as they did not want to change from the traditional ash wooden rail type bodies.

The Heavers site had several changes made to it, with various industries and is now a housing estate.
Just after the Second World War there was many vehicles and chassis about and these were then used to convert or build new vehicles.

The Fish & Chip Van was used from its base in Ludgershall where R.V.Rusher who also had ice cream vans and catering vans owned it.  They used to travel through the villages with Durrington being one their rounds.  Local man Wilfred Henry Oakes was one of the drivers, who is seen here with this van in 1947, as he set off on his rounds.

The yellow, black and white liveried van consisted of aluminium interior facilities for preparing and cooking the meals.  The van had a fryer onboard run by a solid fuel heating system.  The coal fryer used coke to keep the meals hot while in transit. Coal was then added to the fire to give extra heat to the fryer when cooking commenced.

Rushers of Ludgershall supplied fish & chips and ice creams, until the 1970's.

Mr Oakes still lives in the village, he spent many years driving all kinds of vehicles from tanks, while in the 8th tank Regiment, lorries and buses for Wilts & Dorset and express coaches, on weekend trips, taking troops home on weekend leave.  Mr Oakes remembers well the travels he made with this van, which was seen all over the Salisbury Plain area in the 1940s and 1950s.

The van had not been seen for sometime but it was often talked about.  The vehicle has now been on several recent London to Brighton Commercial vehicle runs and has been restored to almost its original condition.
The photographs taken during the commercial vehicle run are as the van is today, following restoration by its present owner Andy Bennett.  The van was bought for him by his father in 1967 after seeing it for sale in the press and drove back to his home.

These photographs have been donated by Mr Oakes and the vans present owner, who restored the vehicle and lives near Reading and is often seen at local events.  Also some are from my Late Father's collection. 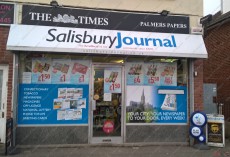 Palmers Papers has been run as a traditional news agency, it is in the heart of the village in a small shopping parade and has been established for over 30 years. Although only a small village shop, it is a hive of activity during parts of the day.

Peter and Helen Palmer are shortly retiring from the village paper shop.  The Palmers have supported several village activities and assisted many charities with raffles and donation pots on the counter etc.

I would like to wish them a very happy retirement and  thank them on behalf of the Alzheimer’s Society for the years of support and raising of funds that has taken place from the shop. 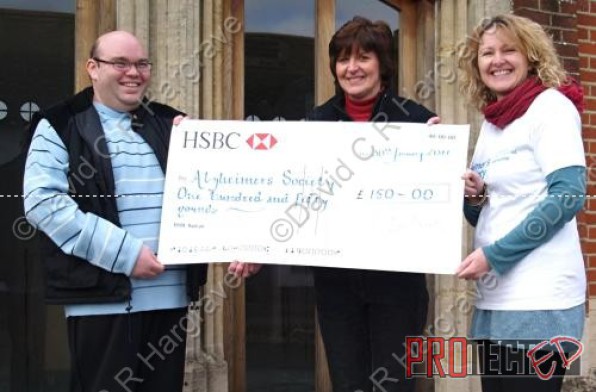 The Vallis Family have been Family Friends for many years, they live just 50 metres from me.  I have known them since we moved to Durrington.  David’s Father Jack, was a very well respected Parish Councillor in the village for many years.

I can remember David when I was a College boy, he was often seen running for the bus down the road, doing up his tie, an almost daily effort.

David came along with photographer Roger Elliott and interviewed my Parents on their Golden Wedding Anniversary for the Salisbury Journal.  The photograph taken by Roger is featured on the opening page of this website.

I recall all the times that David assisted me and supported me in the press world with my photography.

On one occasion whilst at Great Dorset Steam Fair with David, I said to David 'look what you have got me into, I would never have been able to do all this without your support”.

David was great company, he was very quiet and well respected, he will be missed by those who knew him.  I for one will always remember what he has done for me and no doubt many others.  Through him I now travel all over the country and have very many contacts in the press world, with papers and magazines. 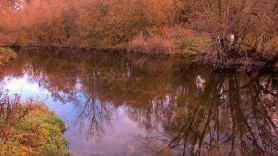 Early morning on the River Avon in Durrington. 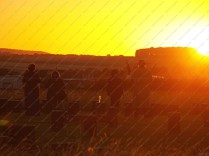 Durrington Walls which is much older than Stonehenge and also the site of one of the largest stone age settlements in the Country, has always been a popular site to celebrate the sunrises through the years.

You get such spectacular views of the sunrise and also moon rises across the valley of Durrington and Bulford from behind the clump of trees on Salisbury Plain known as Dumbell Copse.

Sunrise here was at 04.51 and was observed by a crowd of people, in very warm conditions.  The photographs were taken from 04:40.  This was a classic sunrise and it took place many minutes before the sun was seen at Stonehenge.  It was more than twenty minutes later that the sunrise was seen by the thousands at the stones and the roar from the people gathered there, as it was spotted, could be clearly heard as the people at Woodhenge started to disburse. 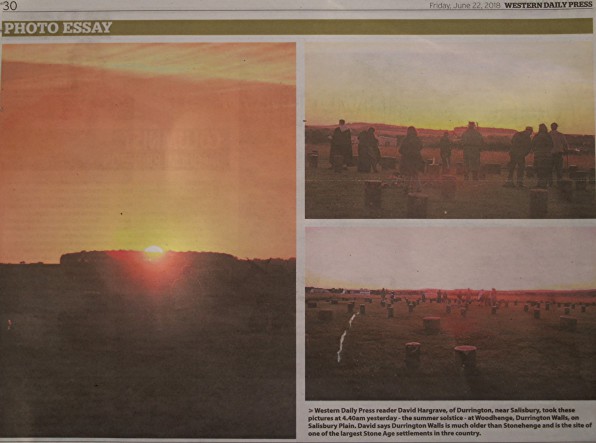