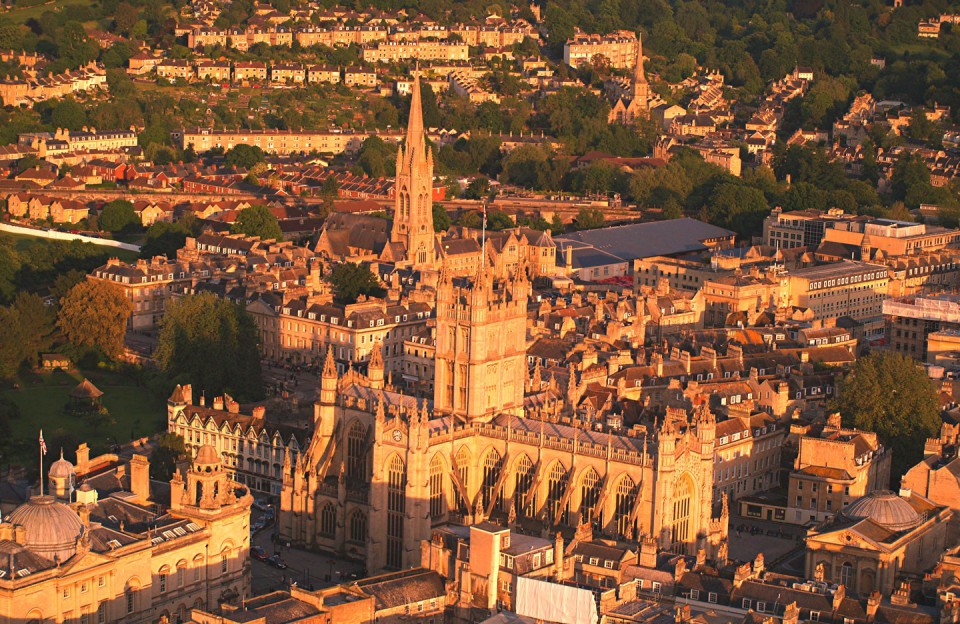 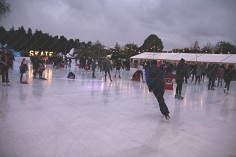 Bath on Ice - RVP - 21.12.19
These photographs were taken on 21.12.19.  Large crowds were on the ice enjoying the venue, despite the very wet weather conditions.
This annual event will be open every day except Christmas Day until the 5th of January 2020. 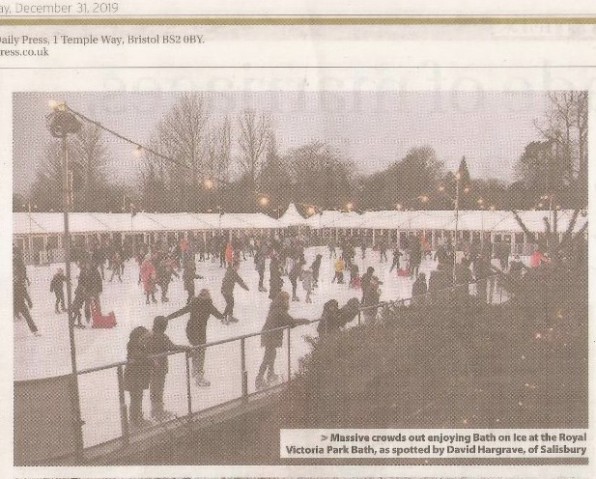 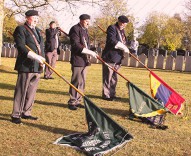 Remembrance Day Service, Haycombe War Memorial - 11.11.19
The event, which is being staged by B&NES Council’s bereavement services team, takes place between the Cross of Sacrifice and the Blitz graves.
This service was, as always, well attended and is always held at the Haycombe War Memorial on the 11th November.
BANES Chairman, Councillor Eleanor Jackson and Councillor Paul Crossley laid wreaths and other Councillors were present.  Veterans and British Legion members always attend, along with relatives of those who perished in the conflicts and the local residents.
The Last Post was played.  The "Last Post" which is a bugle call used at British or Commonwealth military funerals and ceremonies commemorating those who have been killed in war. The Last Post symbolises the duty of the dead is over and they can rest in peace. "The Rouse" is commonly played following "Last Post".
I always attend this Service to support the Somerset Light Infantry Veterans.
My photographs show how one family suffered a severe loss of five of its family members.
For information extract from Mr Kilminster’s previous press report:
www.bbc.co.uk/news/uk-england-somerset-48788756
Local historian Chris Kilminster, who lost five family members, raised more than £15,000 to fund the memorial on the site of an air raid shelter hit by the bomb on 26 April 1942.
Mr Kilminster said he was "so grateful" to people who supported his campaign.
Speaking at the ceremony, Mr Kilminster said his memorial was for the 417 people who died in the Bath Blitz.
It is believed German bombers were intending to hit a nearby railway junction or gas works with the 500kg (1,100lb) bomb but fell short.
Haycombe Cemetary is also the final resting place of most of the 417 civilians that were killed in the Baedeker bombing raids in April 1942.
Bath was subject to numerous air raid warnings, as raiders flew overhead on their way to Bristol, but none were dropped on the town itself.  This changed in April 1942 with the start of the Baedeker Blitz.
The Baedeker Raids of 1942
The Baedeker Raids or Baedeker Bombings took place between April and June 1942. The Baedeker bombing raids on old historic English cities were named after the Baedeker travel guidebooks that the Germans used to identify their targets, which were three-starred, i.e. worth visiting, old English cities.
Bath Blitz
Over the weekend of 25 - 27 April 1942, Bath suffered three raids, from 80 Luftwaffe aircraft which took off from Nazi occupied northern France.
As the city sirens wailed, few citizens took cover, even when the first pathfinder flares fell, the people of Bath still believed the attack was destined for nearby Bristol. During the previous four months Bristol had been hit almost every night, so the people of Bath did not expect the bombs to fall on them.
The first raid struck just before 11 pm on the Saturday night and lasted until 1 am. The German aircraft then returned to France, refuelled, rearmed and returned at 4.35 am. Bath was still on fire from the first raid, making it easier for the German bombers to pick out their targets. The third raid, which only lasted two hours but caused extensive damage, commenced in the early hours of Monday morning. The bombers flew low to drop their high explosives and incendiaries and then returned to rake the streets with machine-gun fire.
417 people were killed, another 1,000 injured. Over 19,000 buildings were affected, of which 1,100 were seriously damaged or destroyed, including 218 of architectural or historic interest. Houses in the Royal Crescent, Circus and Paragon were destroyed and the Assembly Rooms were burnt out. A 500 kilograms (1,100 lb) high explosive bomb landed on the south side of Queen Square, resulting in houses on the south side being damaged. The Francis Hotel lost 24 metres (79 ft) of its hotel frontage, and most of the buildings on the square suffered some level of shrapnel damage. Casualties on the Square were low considering the devastation, with the majority of hotel guests and staff having taken shelter in the hotel's basement
The buildings have subsequently been restored, although there are still some signs of the bombing. 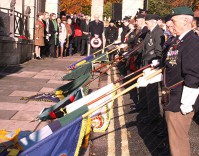 Bath Remembrance Parade - Remembrance Sunday, 10 November 2019
These photographs were taken this morning at the City of Bath's War Memorial, Royal Victoria Park.
It is the year marking 75 years since D-Day, and we are only a matter of months away from 2020 - the year that will mark the 75th anniversary of the end of the Second World War.
This was one of the largest crowds seen at the annual Memorial service, at the War Memorial situated by the gates to the Royal Victoria Park.
The crowds seem to be on the increase each year at this Service, with people standing in every available vantage point, despite there being other Services at the same time at all the other Memorials across the Country.
The Parade Commander, Captain Jonathon Ledgister  thanked all those attending and escorted the Mayor of Bath Councillor Gerry Curran around the parade assembled.
The Mayor of Bath Councillor Gerry Curran, laid a wreath of poppies along with representatives from the Royal British Legion, other organisations and the Church, who were all in attendance.
Larry Coles (From Bath Spa Band) played the Last Post, followed by a two-minute silence, and a wreath of poppies was also laid at the memorial by Major Roger Evans from the Royal British Legion. 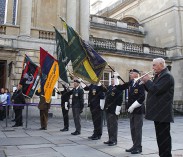 Larry Coles (from Bath Spa Band) playing the Last Post
Dedication of the Field of Remembrance - 03.11.19
The annual Dedication of the Field of Remembrance took place in the Abbey Churchyard organised by the Royal British Legion, Bath Branch.
Mayor of Bath Councillor Gerry Curran, along with representatives from the Royal British Legion, other organisations and the church, were all in attendance and laid crosses at the ceremony.
The annual ceremony saw war veterans, armed forces personnel and church leaders come together to remember those who lost their lives.
Several visitors and local people stopped to watch and listen to prayers that given for those who had died and those still fighting in war zones across the world.
Larry Coles (From Bath Spa Band) played the Last Post, followed by a two-minute silence, and a wreath of poppies was laid at the head of the memorial by Major Roger Evans from the Royal British Legion.
The Salvation Army band provided the music during the service. 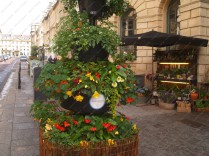 The South West in Bloom judging will take place on 17th July.  Judges on the day will be Richard Budge and Jim Collins.

I have been in Bath this morning to view some of the South West in Bloom entries for the Bath in Bloom Committee.  Some of the photographs below show the Botanical Gardens long border and the Bath WI floral tribute.

Bath getting ready to Bloom again for Judges 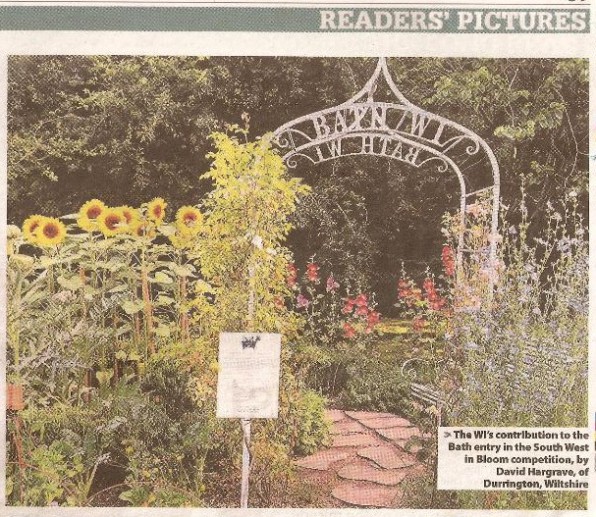 The annual event has been held in Bath since 2009, at various venues in the city.  Organised by Bath & North East Somerset Council in association with local heritage partners, the day promotes Bath’s UNESCO ‘World Heritage Site’ status and enables people to explore and enjoy Bath’s heritage and history.

This year visitors had the opportunity to find out about Bath’s architecture from Roman times right through to the 21st century through talks, walks, displays, crafts and hands-on activities.

They were joined by characters influential in shaping Bath – Georgian architect John Wood accompanied by one of his builders, and Major Charles Davis, Bath Corporation’s Surveyor and Architect from 1863 to 1902, who initiated the building of the Empire Hotel and the excavation of the Roman Baths.

The Mayor’s Honorary Guides led guided tours for visitors to discover more about the history of the Green Park and Avon Street area and its residents.  Conservation specialists from Bath Preservation Trust took walking groups out along the riverside to look at recent and planned developments.

The subjects for the themed talks spanned 2000 years of Bath’s architectural and engineering past, from Roman innovations to 21st century trends.

There was a unique opportunity to watch stone masons at work using traditional skills and techniques, as well as have a go at carving guided by expert masons and apprentices.

Visitors of all ages enjoyed building arches, working an aqueduct, designing a temple, drawing houses for a giant map of Bath, exploring Prior Park’s lakes using Virtual Reality and Bath Abbey’s plans using Augmented Reality, solving engineering challenges with Plasticine and Lego, researching their homes and streets, replicating the repair of Bath Abbey’s stone floor with biscuits and icing and going round the site on a stamp trail.

The Victorian Grade II Listed Green Park Station was the perfect setting for a day celebrating Bath’s engineering and buildings through the ages.  World Heritage Day 2019, once again, proved to be a real attraction for local people and visitors to the city.