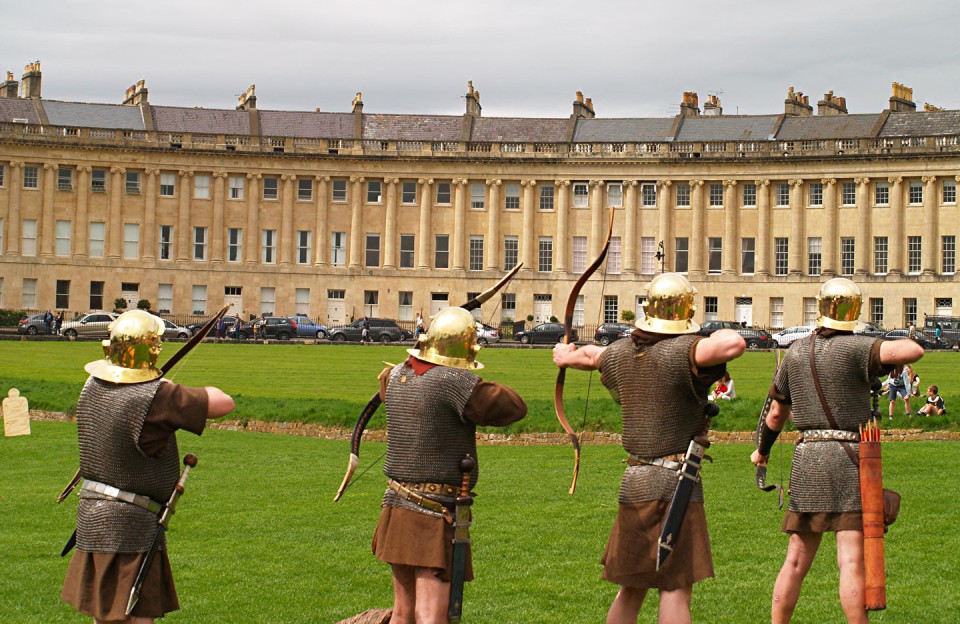 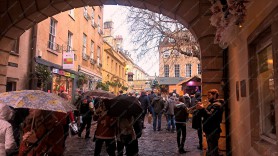 These photographs were taken early, at what would have been sunrise,  as the rain came down and the Bath Christmas  market opened.  This did not deter the thousands of people from visiting the city, a total of 14 inner city streets were closed to accommodate the shoppers.

I managed to leave Bath around midday, before an estimated 14,000 rugby fans arrived for a match, starting at 15.00!  It took me over an hour to get out of the city and I was greeted by queuing traffic heading into the city for several miles. 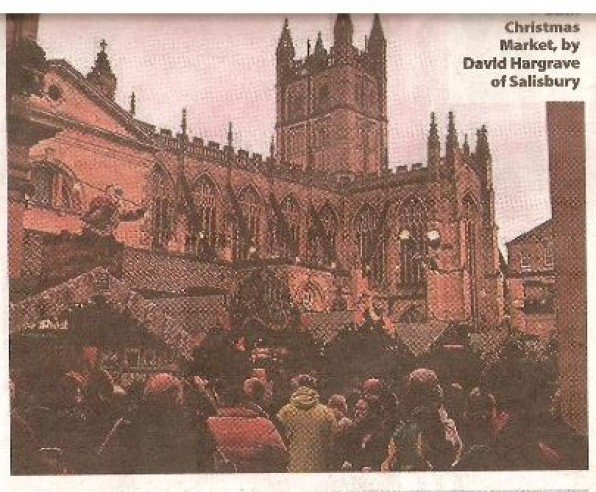 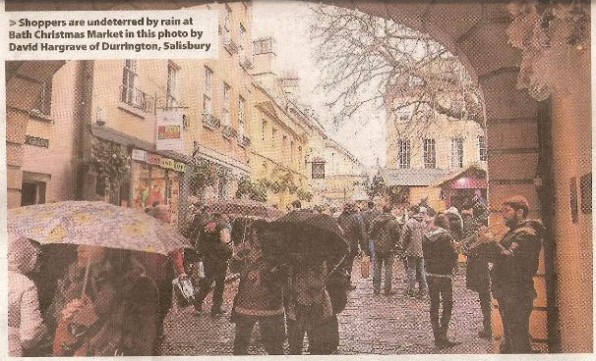 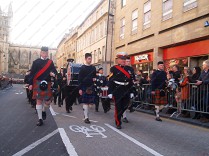 The Parade was led as usual, by the Downside School Band, who also entertained the crowds and was followed by Veterans and Representatives of the Military and other groups. 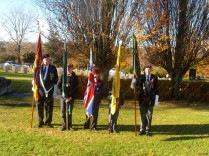 This service was as always well attended and is always held at the Haycombe War Memorial on the 11th, the service was conducted by The Rev’d Dr Catherine Sourbut.

BANES Councillors, Veterans and British Legion members always attend, along with relatives of those who perished in the conflicts and the local residents.  This year the local Scouts and Guides groups attended as well.

Near to where the service is held, is a Memorial Cross and below this are the War Graves, commemorating those who gave their lives during the conflicts.  It is also the final resting places of most of the 417 civilians that were killed in the Baedeker bombing raids in April 1942.

Bath was subject to numerous air raid warnings as raiders flew overhead on their way to Bristol, but none were dropped on the town itself. This changed in April 1942 with the start of the Baedeker Blitz.

The Baedeker Raids or Baedeker Bombings took place between April and June 1942. The Baedeker bombing raids on old historic English cities were named after the Baedeker travel guidebooks that the Germans used to identify their targets, which were three-starred, i.e. worth visiting, old English cities.

Over the weekend of 25-27 April 1942, Bath suffered three raids, from 80 Luftwaffe aircraft which took off from Nazi occupied northern France.

As the city sirens wailed, few citizens took cover, even when the first pathfinder flares fell, the people of Bath still believed the attack was destined for nearby Bristol. During the previous four months Bristol had been hit almost every night, so the people of Bath did not expect the bombs to fall on them.

The first raid struck just before 11 pm on the Saturday night and lasted until 1 am. The German aircraft then returned to France, refuelled, rearmed and returned at 4.35 am. Bath was still on fire from the first raid, making it easier for the German bombers to pick out their targets. The third raid, which only lasted two hours but caused extensive damage, commenced in the early hours of Monday morning. The bombers flew low to drop their high explosives and incendiaries and then returned to rake the streets with machine-gun fire.

417 people were killed, another 1,000 injured. Over 19,000 buildings were affected, of which 1,100 were seriously damaged or destroyed, including 218 of architectural or historic interest. Houses in the Royal Crescent, Circus and Paragon were destroyed and the Assembly Rooms were burnt out. A 500 kilograms (1,100 lb) high explosive bomb landed on the south side of Queen Square, resulting in houses on the south side being damaged. The Francis Hotel lost 24 metres (79 ft) of its hotel frontage, and most of the buildings on the square suffered some level of shrapnel damage. Casualties on the Square were low considering the devastation, with the majority of hotel guests and staff having taken shelter in the hotel's basement.

The buildings have subsequently been restored, although there are still some signs of the bombing.

Jack was greeted and also thanked by Bath Councillors Paul Crossley Dine Romero and Neil Butters for his efforts to be at the Ceremony.

Jack was born in Bath in 1920.  After joining the army in 1938 he undertook training and coastal defence duties in England.

Jack’s battalion embarked for France in June 1944 soon after the D Day landings. He served as a driver in the unit’s transport company throughout the campaign in North West Europe, including the terrible battle for Hill 112 in Normandy.

After leaving the army Jack worked for British Tramways in Bath and married in 1947.

Following the service I was able to spend a few minutes with Jack.  Although now in a wheelchair and not able to hear very well, he was still playing an active part in the ceremony.

I do spend time with these old comrades, at this time of the year at the events they attend.  Unfortunately, they have lost a few members over the years, since I have known them.  They always make me very welcome and are a very happy friendly bunch.  I feel I have been accepted as part of their group and feel privileged to be able to spend some time with them and hear some of their stories and things they have been through. 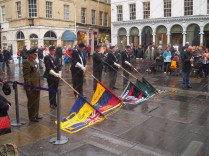 These photographs were taken at the Abbey Churchyard, Bath.

The annual Dedication of the Field of Remembrance ceremony organised by the Royal British Legion, Bath Branch, took place outside Bath Abbey on Sunday.

It saw war veterans, armed forces personnel and church leaders come together to remember those who lost their lives.  They took it in turns to lay small wooden crosses and poppies in the cross-shaped patch of lawn at the Abbey Church Yard.

The weather was warm, but as often happens at this service, the weather decided to change to quite heavy showers, but towards the end of the event the rain had eased.

Several visitors and local people stopped to watch and listen to prayers that were said for those who had died and those still fighting in war zones across the world.

Larry Coles (From Bath Spa Band) played the Last Post, followed by a two-minute silence, and a wreath of poppies was laid at the head of the memorial by Major Roger Evans from the Royal British Legion.

Mayor of Bath, Councillor Patrick Anketell-Jones, along with representatives from the Royal British Legion, other organisations and the church, were all in attendance.

The Salvation Army band provided the music during the service. 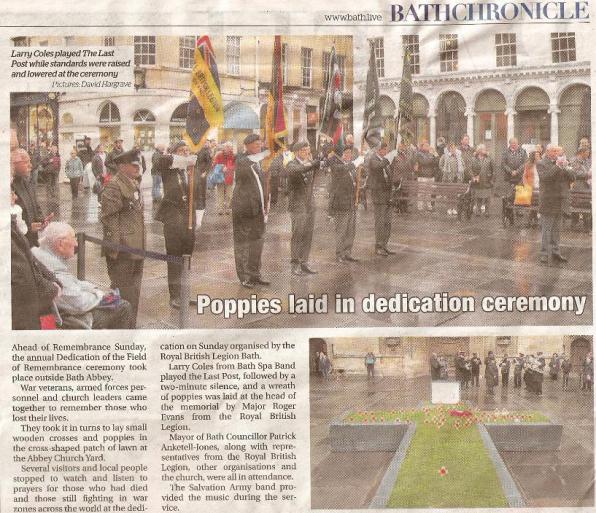 This is Carters steam fair on their annual trip to Bath.  I was at The Royal Victoria Park, Bath for the arrival, of the second large convoy of Carters Fair Vehicles, as they arrived from Cheshire.  The first vehicles arrived the previous evening.

The Fair had been in Cheshire with Chris Evans, for his northern Carfest, having made the trip all the way up north from their White Waltham base, a 350 miles round trip.  No mean feat for normal vehicles etc but with a travelling heritage fair and some slow moving vintage lorries its an epic journey.  The last vehicles arrived in Bath, after a ten hour road trip, having covered the 166 miles from Carfest, North Bolesworth, Cheshire .

The fair opens in Bath on Saturday 4th August and will be in Bath until the 19th August, before heading to Laverstoke Park Farm, Hampshire for Carfest South. 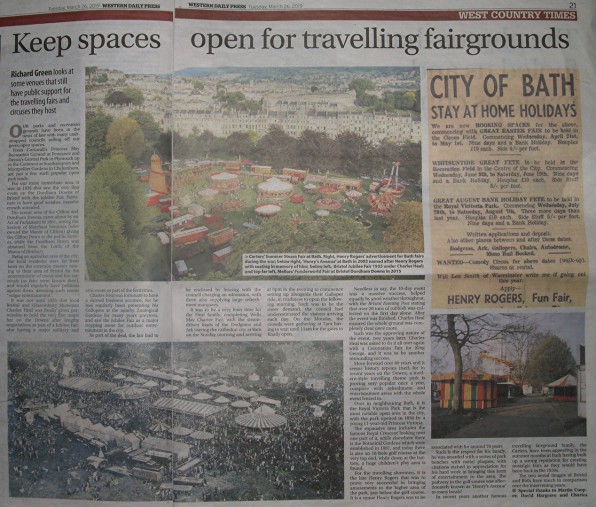 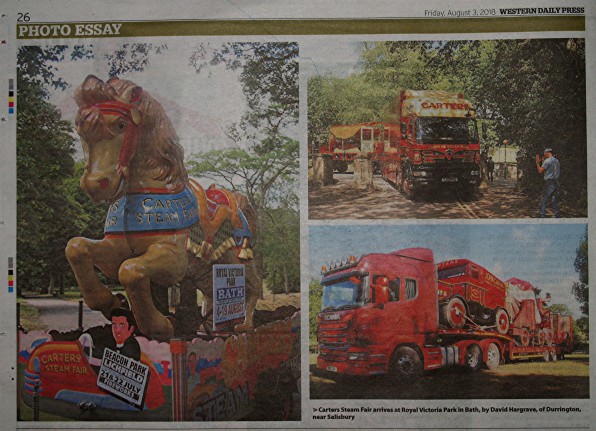 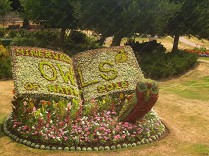 Staff, Volunteers and Sponsors are trying to put on a show despite the recent harsh hot weather.  South West in Bloom Judging will take place on 17th July 2018.  Judges for the event will be Richard Budge and John Yeo. 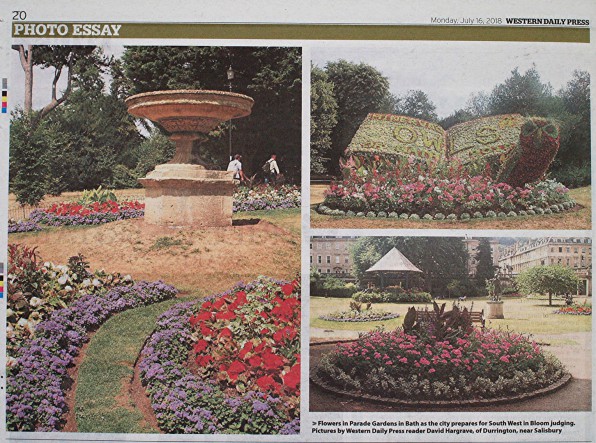 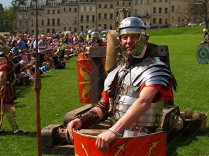 This year's free community event took place from 11am-3pm on Sunday 22 April on the lawn in front of the Royal Crescent.  The Ermine Street Guard, set up a Roman camp for visitors to explore and demonstrated Roman military re-enactments, with special demonstrations of Roman weaponry and manoeuvres.

Along with watching the action, the public were able to talk to the Roman soldiers and investigate how Romans lived, through original objects from the Roman Baths collection.

Further information about the Ermine Street Guard at: http://www.erminestreetguard.co.uk/

In addition to celebrating Bath's Roman past, there was the opportunity to find out more about the city's Georgian heritage.  The Mayor of Bath's Honorary Guides were leading free walks around the Upper Town and shorter guided strolls along the Royal Crescent.

The National Trust was celebrating 25 years of looking after Ralph Allen's landscape garden at Prior Park.

Volunteers from the Herschel Museum of Astronomy displayed their solar telescopes for visitors to safely view the sun.  There was also the chance to dress up as the famous Georgian astronomers, William and Caroline Herschel.