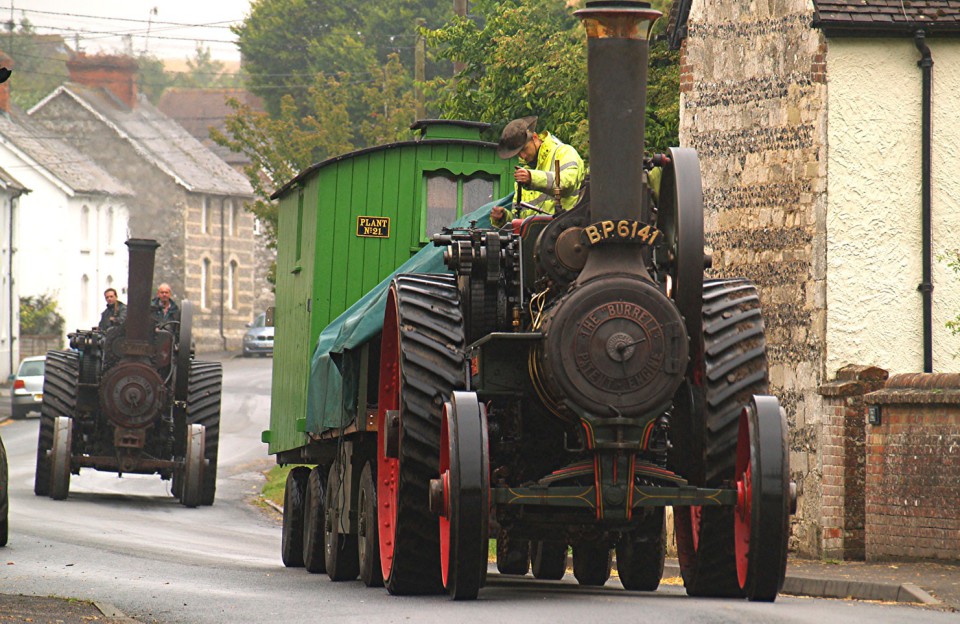 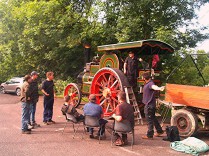 Mr John White himself an Engineer is the owner of BP 6141, The Laird of Bonnie Dundee and Independence, which are the three engines he normally roads to events including The Great Dorset Steam Fair and I have had the pleasure of travelling with them.
The crews that man the engines consist of John with his Son Matt and no less than six steam Engineers, who also either own their own engines or drive engines for different people.

John Miles who usually crews with John White on BP 6141, is an Engineer and Train Driver at the Avon Valley Railway.

Percy Hinder a Recyling Depot owner also crews on BP 6141.  Percy is often seen out driving different engines during the summer.  I first met Percy at an overnight stop, when a birthday cake was produced and we all celebrated Percy's birthday.  Percy's birthday always seems to fall during the trip to Dorset, therefore, he gets ribbed about that.  I did attend his Birthday party at GDSF in 2017 and we had to have the Fire service in attendance, when the candles on the cake were lit!!

Percy of course is also famous and tries to claim royalties for every photograph he appears in.  (No chance Percy!!)  He made an appearnce in the TV Series The Hairy Bikers: Restoration Road Trip, driving a steam engine and Percy was the one seen holding the jug of home made cider!

There are normally 6 crew per engine and other crew members include a Medic and a Gamekeeper.  There seems to be no shortage of people to crew the engines, get involved and their occupations and ages are varied.

It is estimated that an average of three quarters of a ton of coal will be consumed by each of the engines on the way to Dorset from the Gloucester base on a journey of 86 miles.  They will also convert 2,000 Gallons each of water into steam during the run.

Depending on the terrain they usually stop every six to eight miles to check over the engine, oil up, replenish the water and refill the coal bunker.  They also swap crews at these stops.
The water and coal is carried on the specially adapted trailers and the engine can refill using a fitted vacuum tube to the tank on the trailer from the engine.
The engines set off early from their Gloucester base on the Friday before the steam event and stop overnight before another early start to reach the Dorset Steam Fair site during the afternoon on the Saturday.
The route normally travelled is as follows subject to approval and road works:
Chipping Sodbury, Acton Turville, Castle Combe, Chippenham, Rowde, Poulshot Worton, Lavington. Tilshead, Shrewton, Berwick St James, Stapleford, Stoford (overnight stop). Wilton, Stratford Tony, Coombe Bissett, A354 Blanford Road to Dorset Steam Fair site. 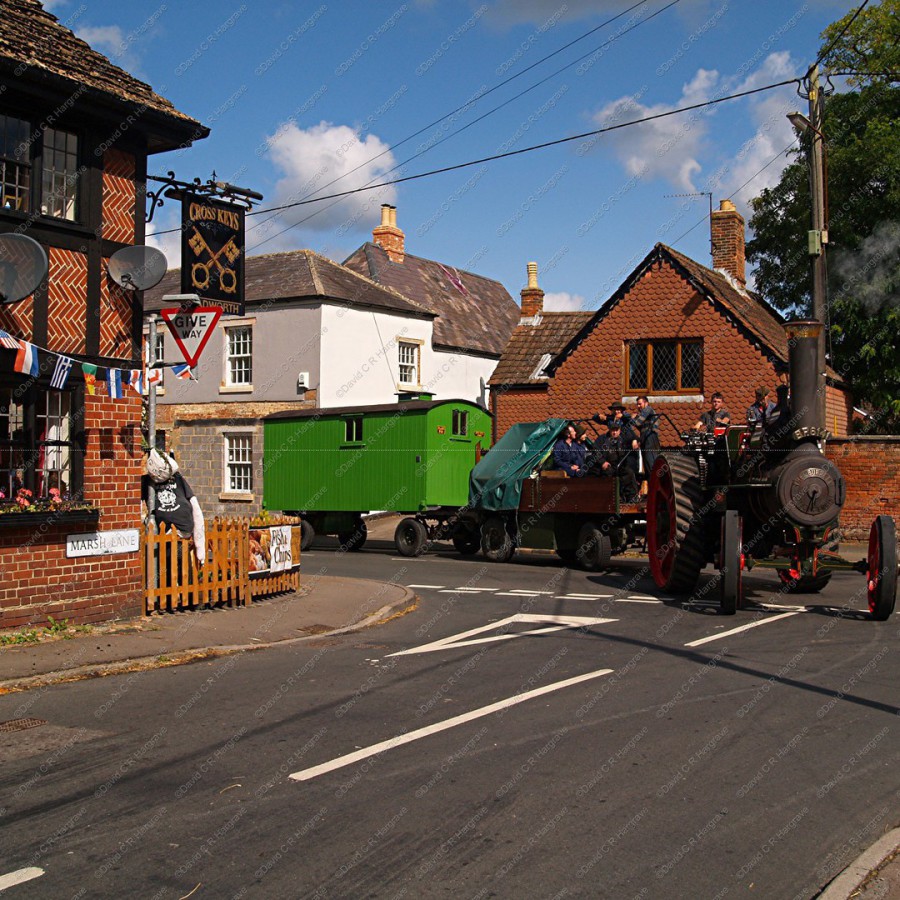 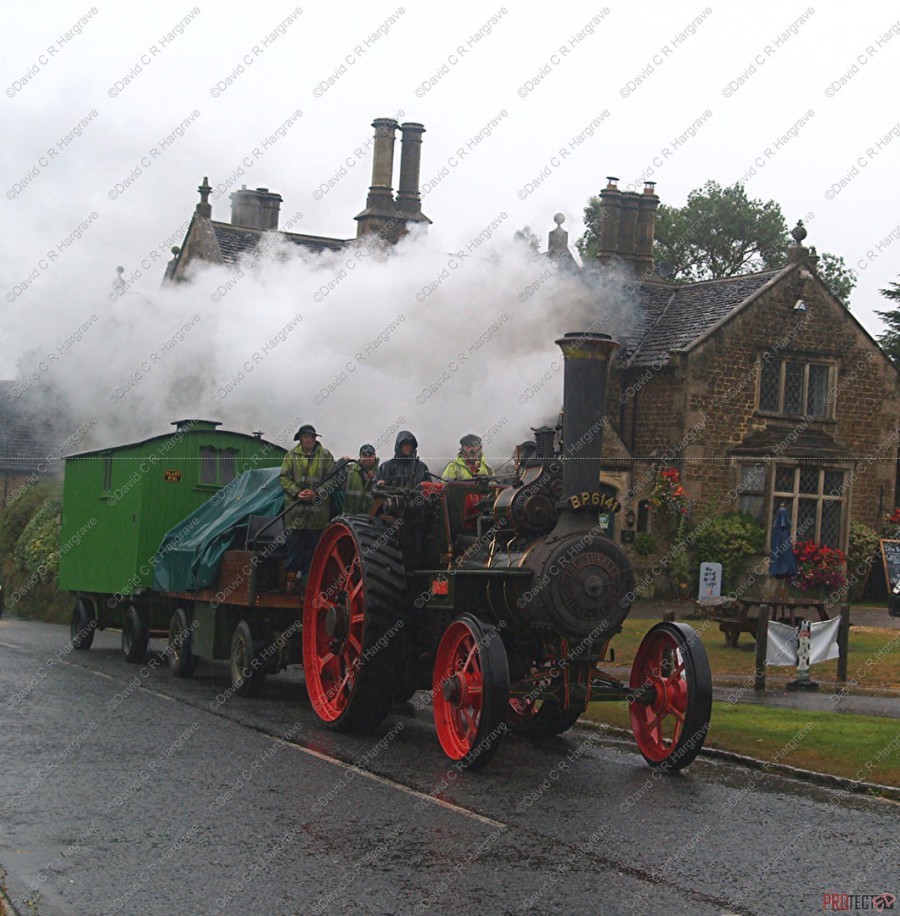 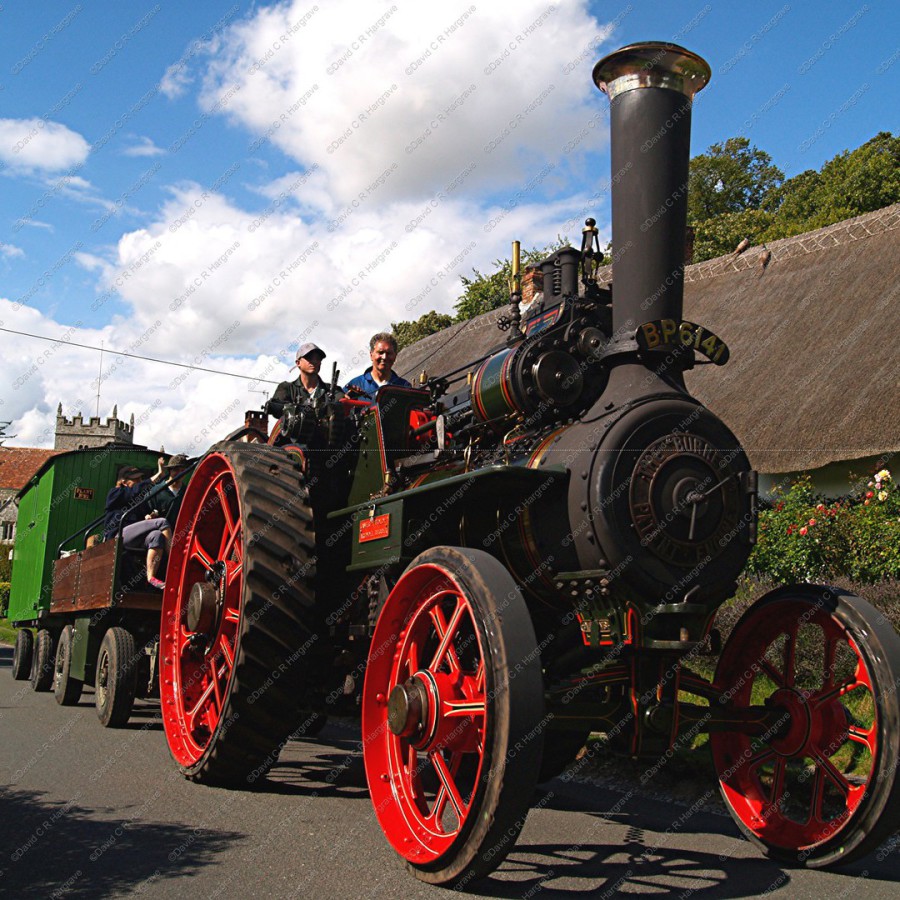 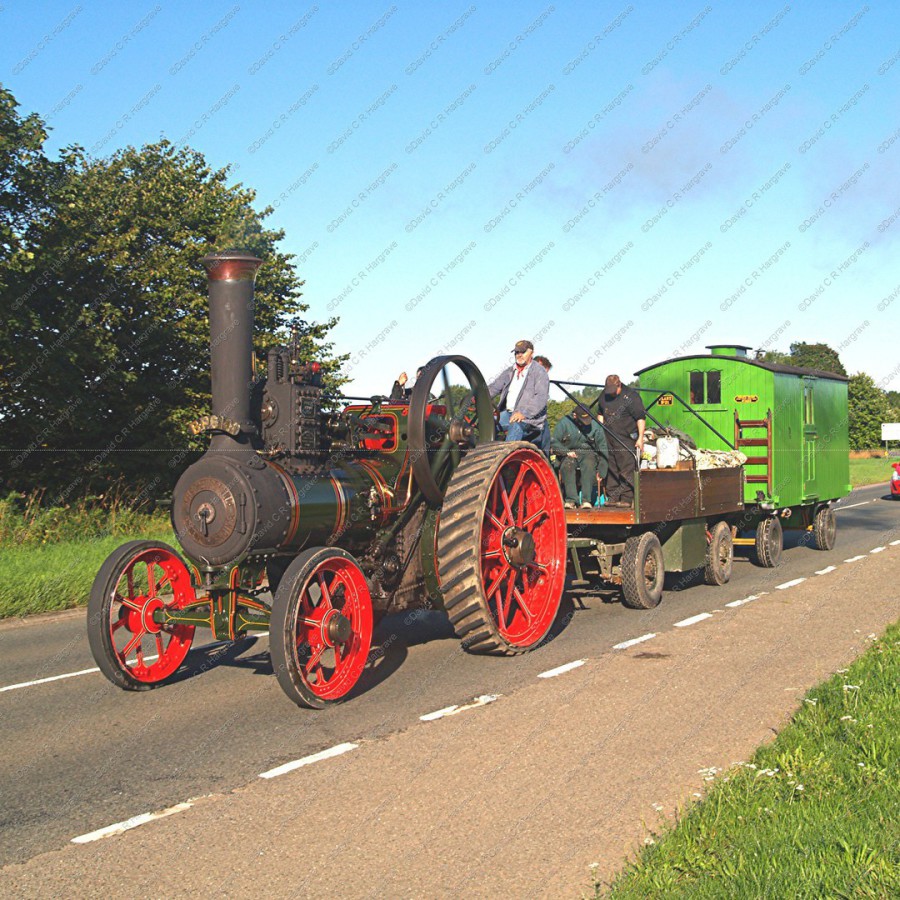 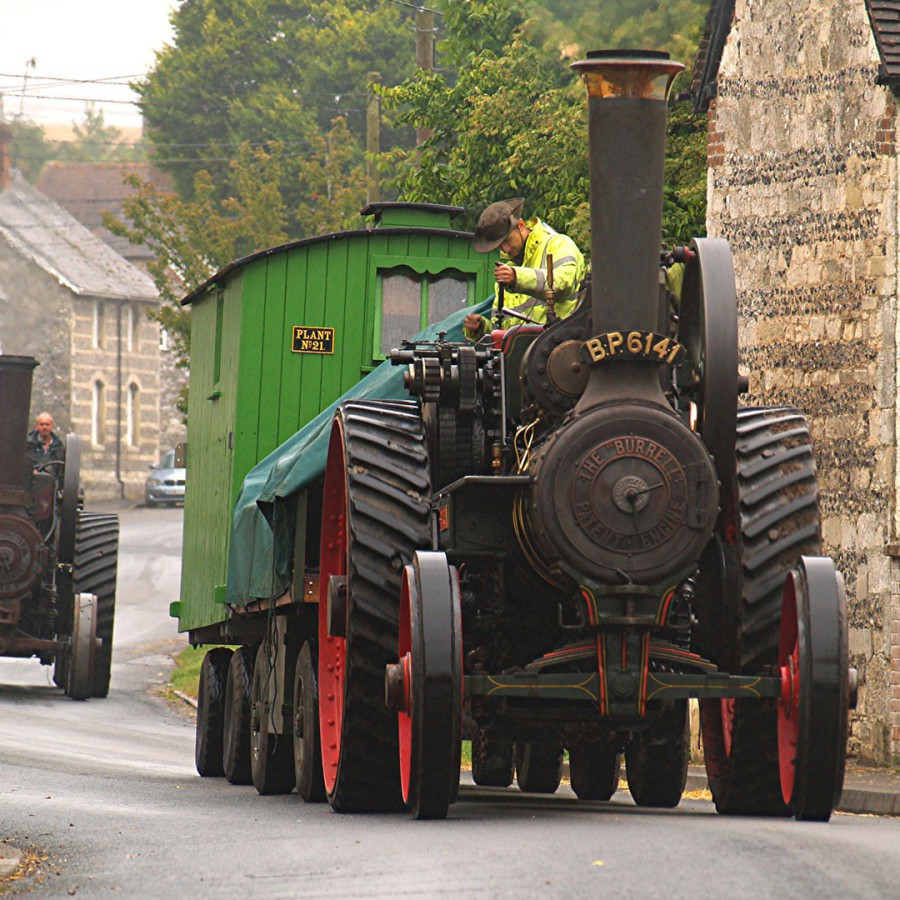 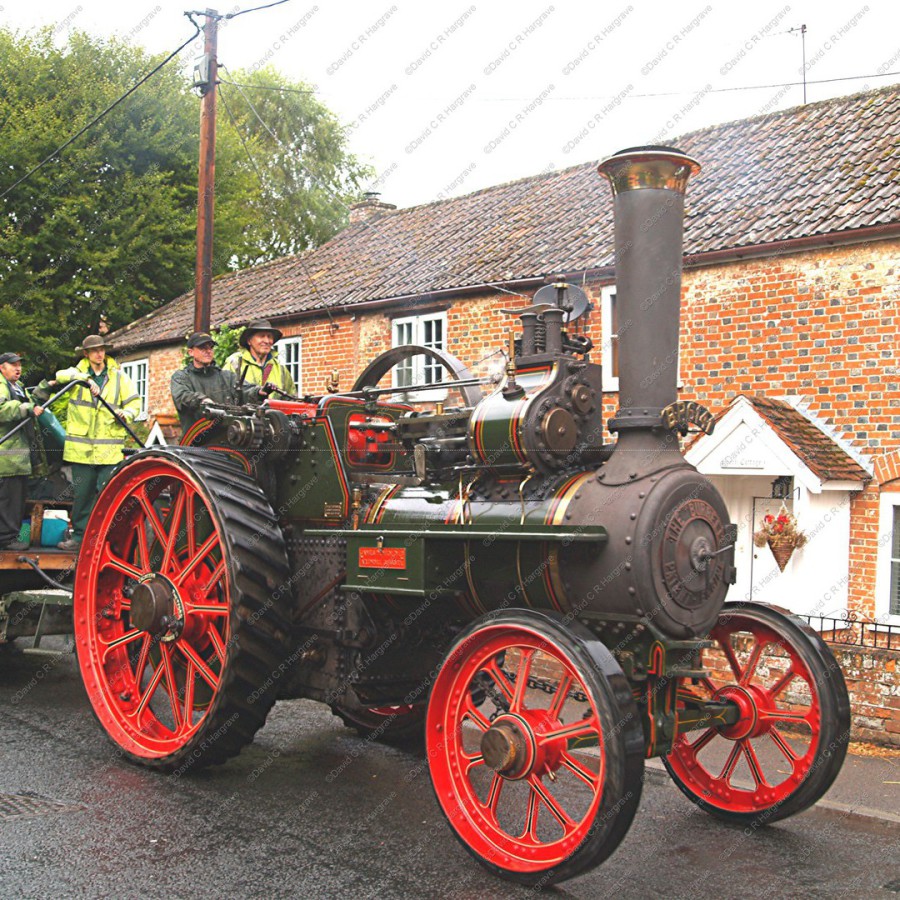 Supplied new to JW Hall, Huntingfield, Suffolk, a farmer land owner.  It was sold in the 1920s at the Sparks sale to Penfolds of Arundel, West Sussex for Agricultural work.  It was used for threshing duties during the day time and stone haulage at night.
The engine was rebuilt by its present owner John White of Gloucestershire.  This engine travels down to Dorset each year over two days and has done so for several years.  It then travels back to its base the following week. 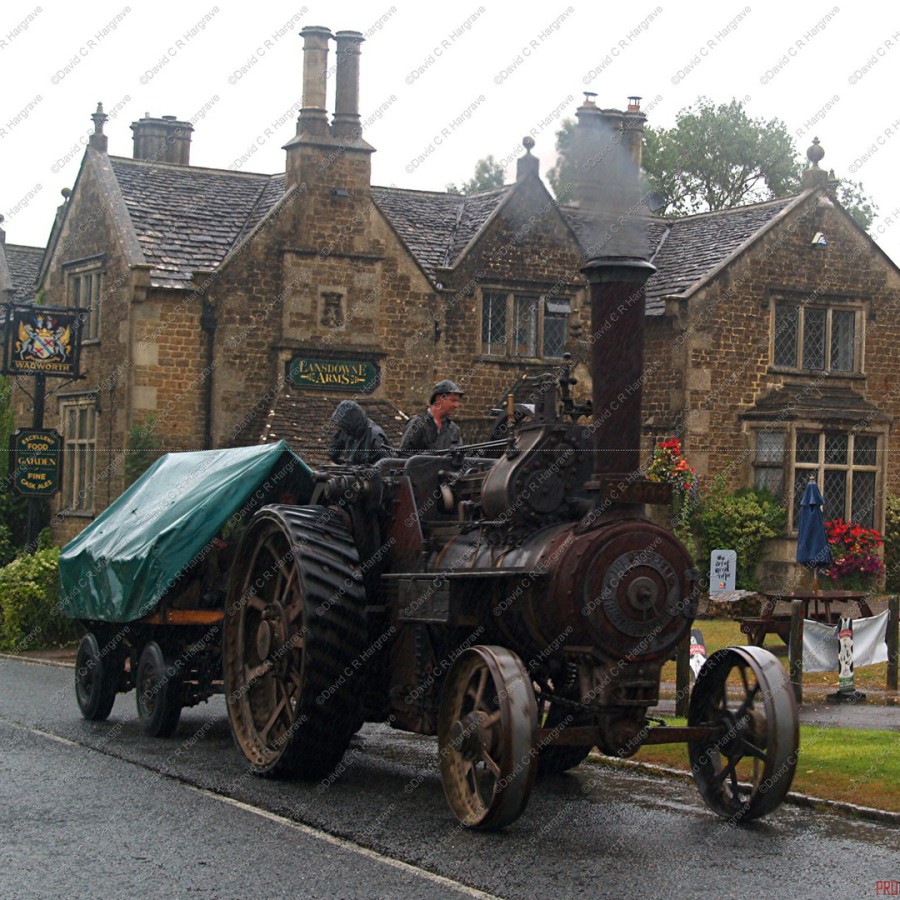 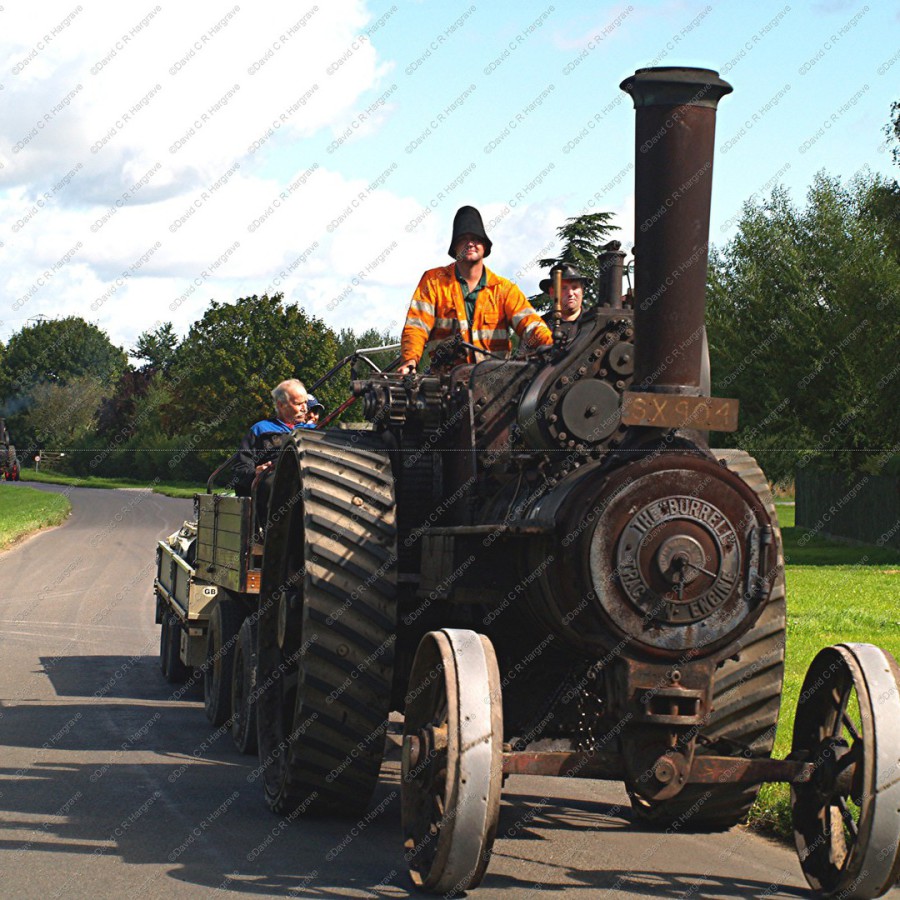 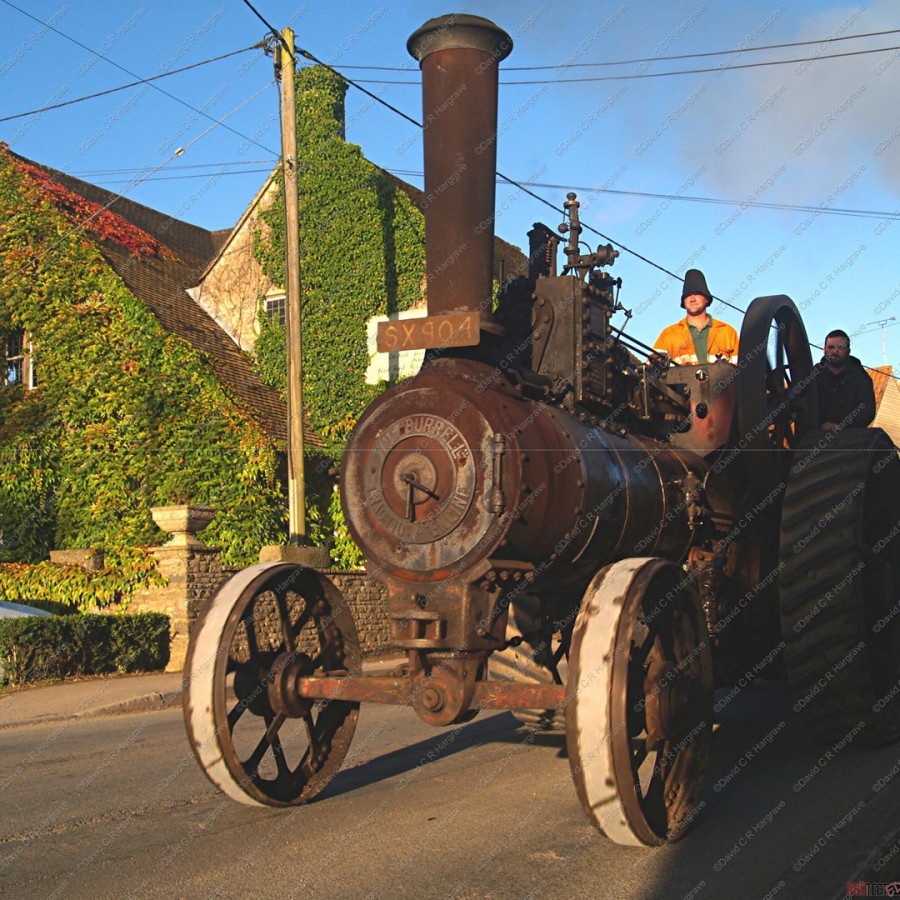 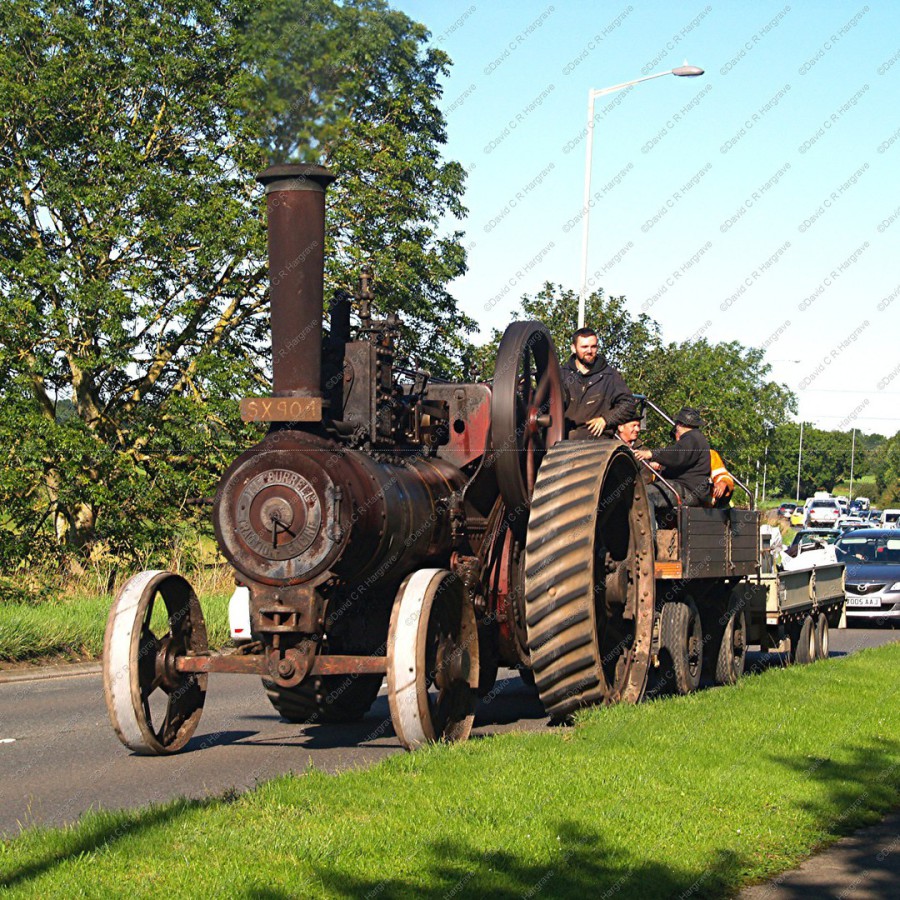 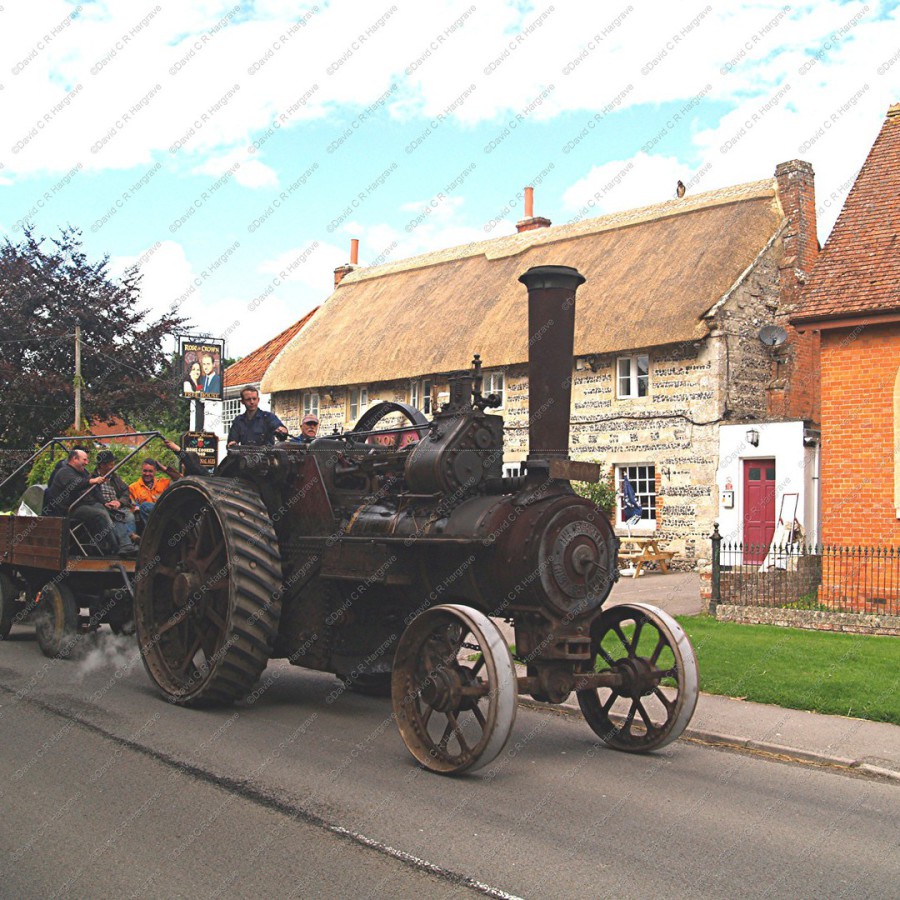 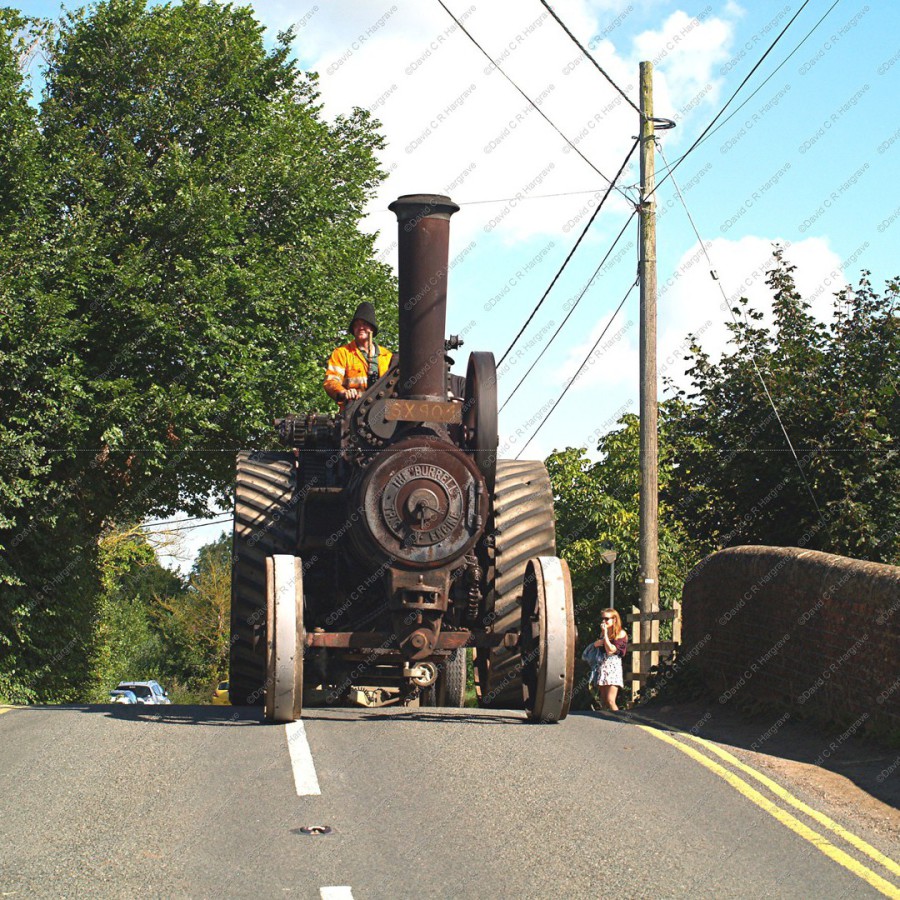 Built in 1916 for DW & A Hope of Broxburn Scotland.  Sold to C & G Bartrup of Essex, later owned by Keelings of Billericay Essex, then D Frost in 1961.
The engine lay under a sheet from May 1961 until purchased by its present owner.  The engine was “mothballed” in 1961 and when found, all motion and hub caps were still polished.  The engine was kept in a back garden in Kempton until 2006.

The present owner John White has re-tubed and hydraulic tested the engine, the original boiler was found to be in near perfect condition with a minimal of corrosion.  It has been driven to many events including several Dorset Steam Fairs in convoy with Johns other engines. 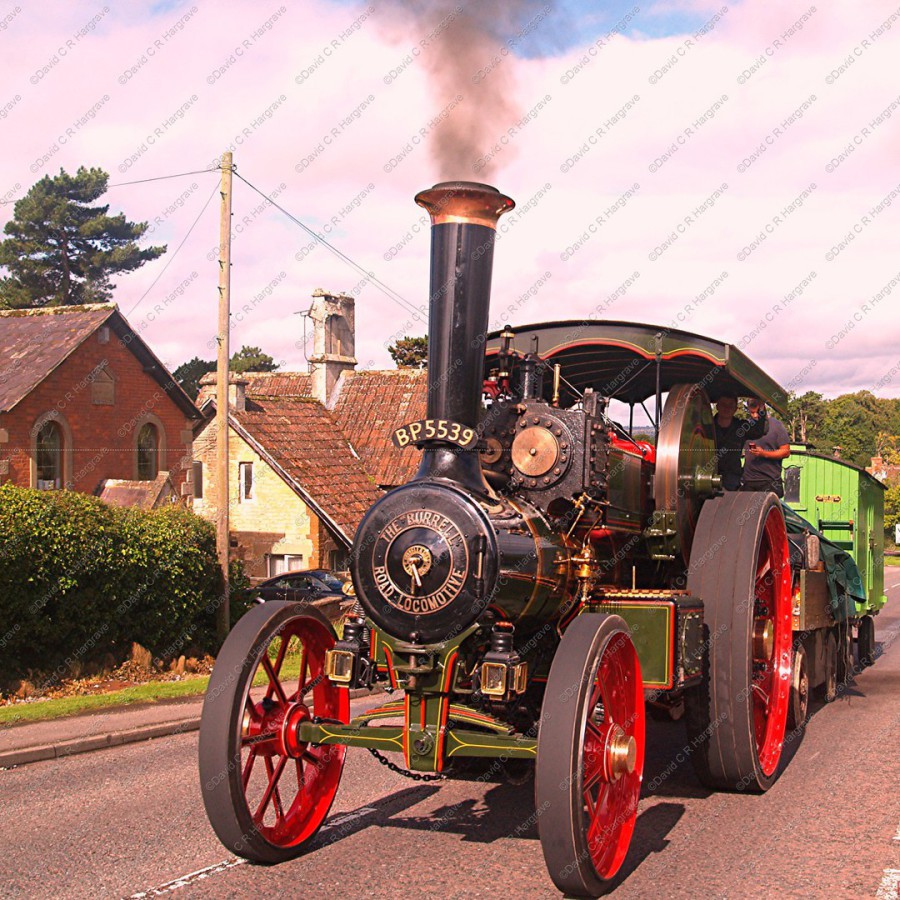 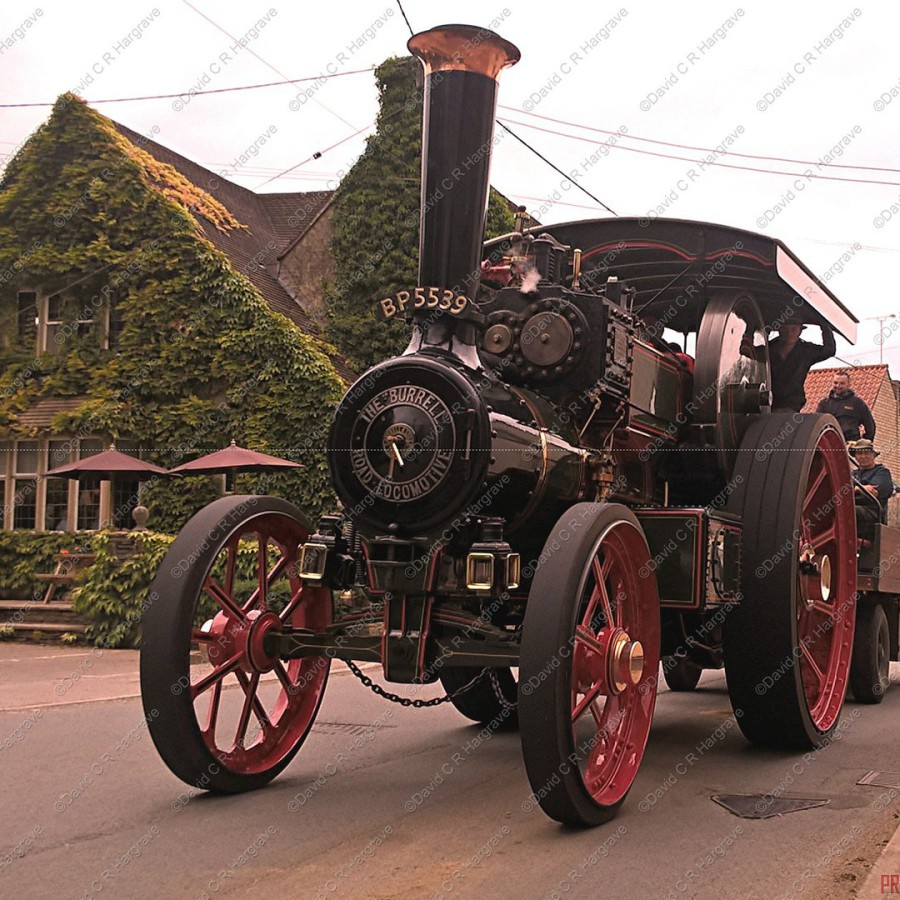 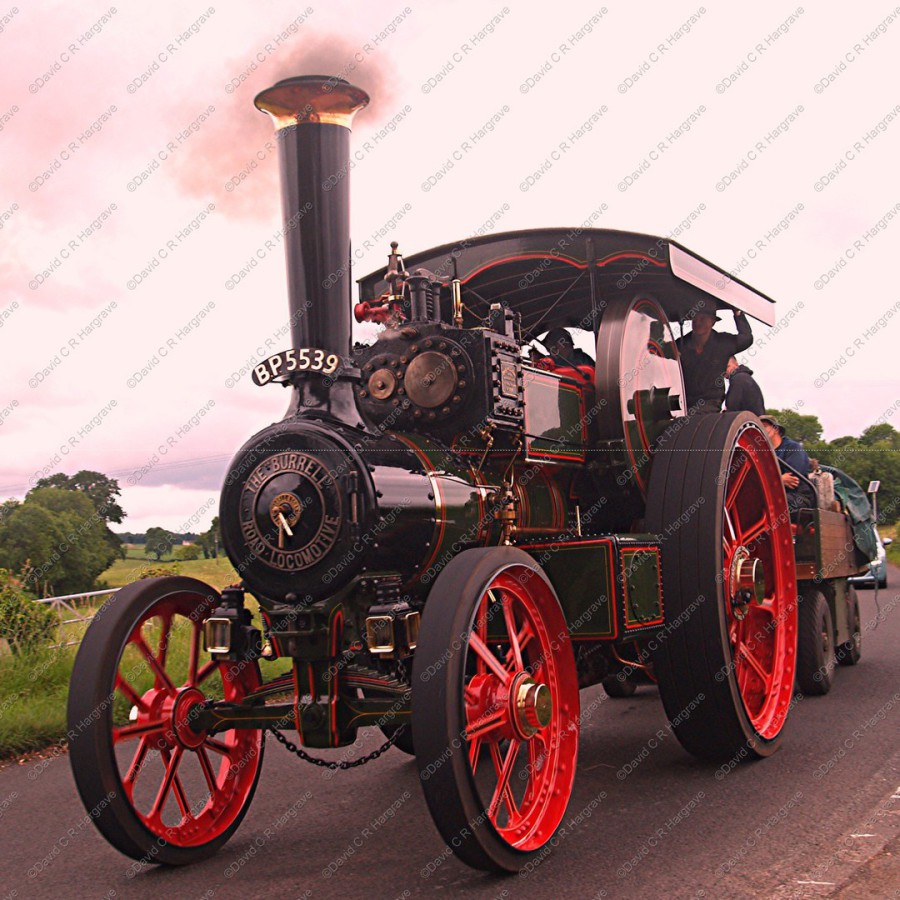 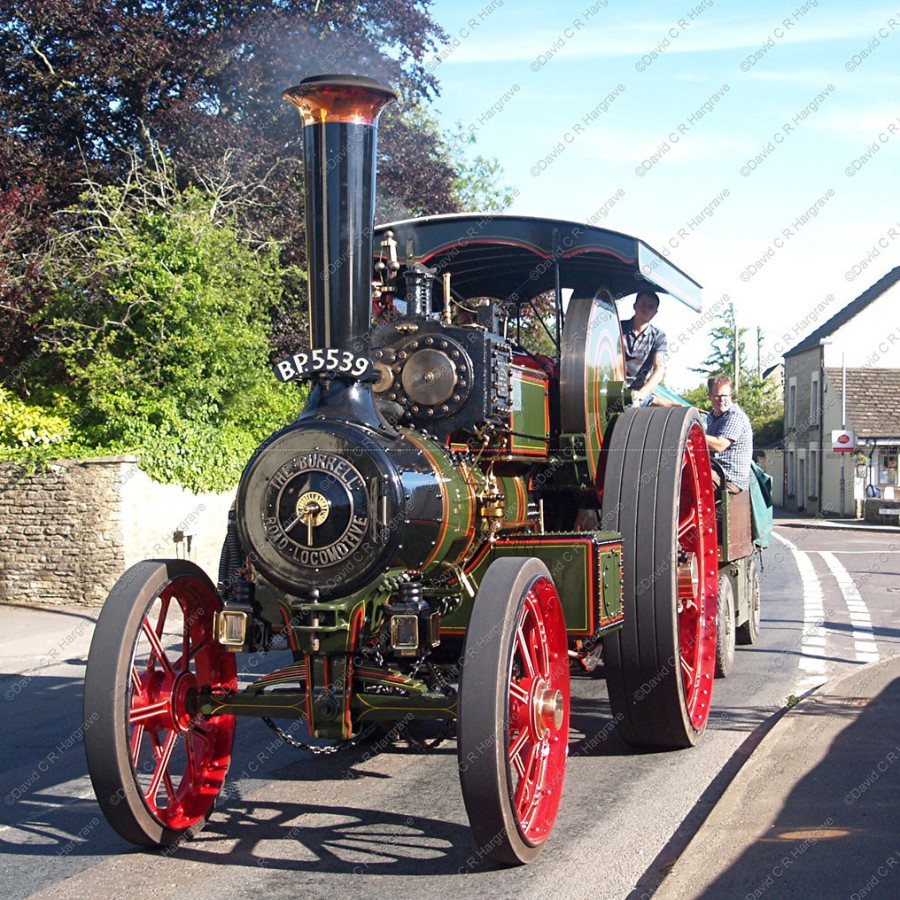 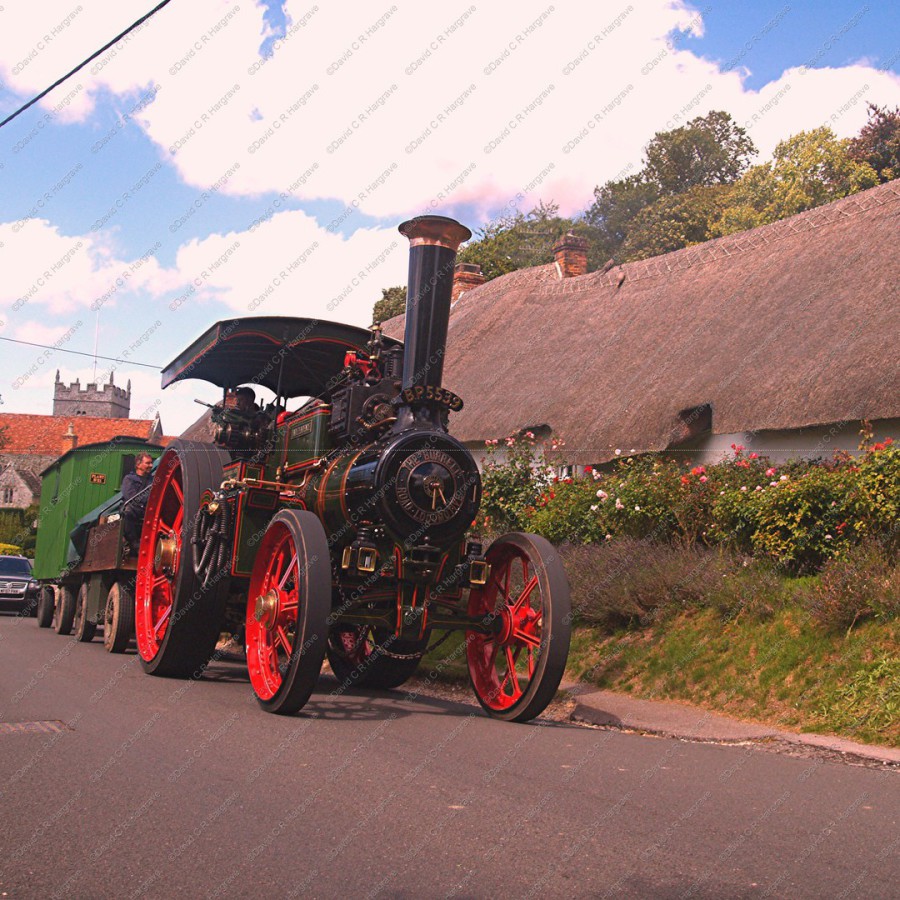 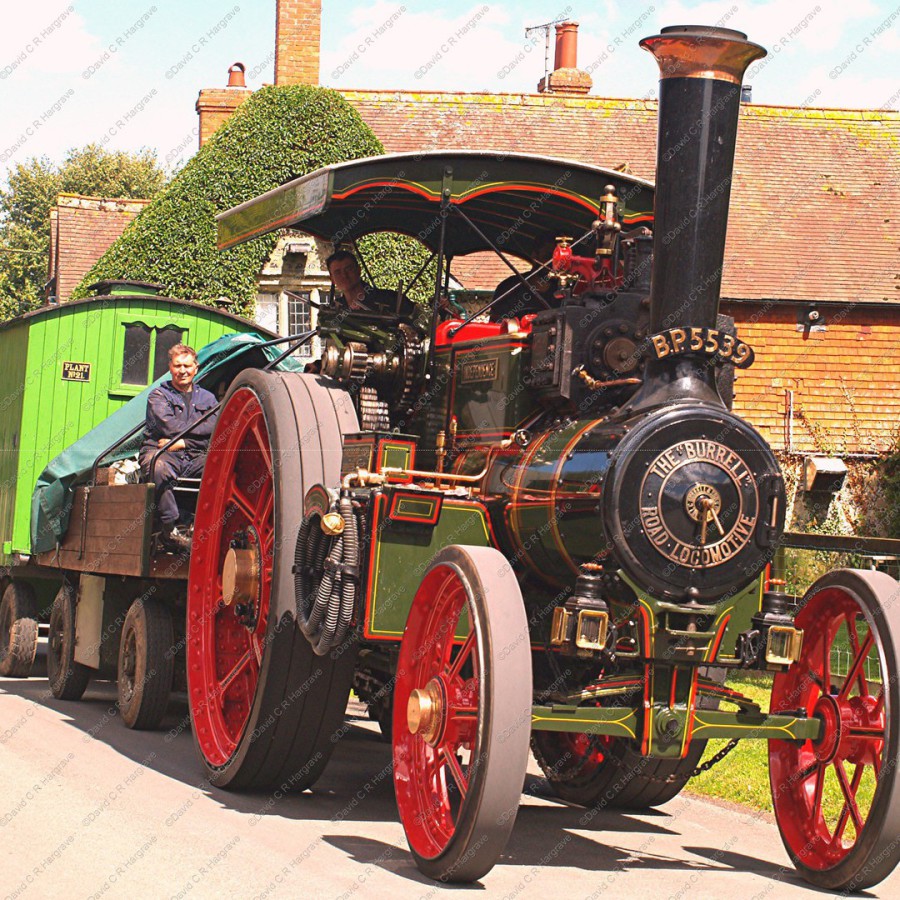 Supplied new to John Heaver of Chichester, who used it in gravel pits for hauling road stone.  Passed into showland on February 28, 1923 with Wools Brothers and subsequently converted to showman’s road locomotive specification, with Burrell parts, the same year.  Finally ended up at Goodeys scrap yard, Twyford, then Hardwicks of West Ewell, then John Evans of Tring (all scrap men).
Independence attended GDSF 2000 as part of the ‘Burrell-themed’ year, in completely derelict condition.  A full restoration has been underway right up until the start of GDSF 2016, by owner John White, who has reverted the engine into an ‘as built’ condition example that has just left the factory, right down to every correct nut and bolt, and appears as a contractors road locomotive in dark green livery.  An immaculate restoration and ready to steam, having not steamed since 1946.  Independence appeared in the Old Glory marquee at GDSF in 2016.
2017 saw John take Independence out on the road for the first time, in his ownership, since the restoration.  It has appeared at Castle Coombe, Heddington & Stockley and Boconnoc Cornwall, travelling under her own steam.
Independence set off at first light from Gloucestershire for GDSF in August 2017.
It is thought that the engine spent some time in a yard with the Showman’s Engine “Earl Kitchener” and 2017 saw the two engines attend a wedding in Badminton.