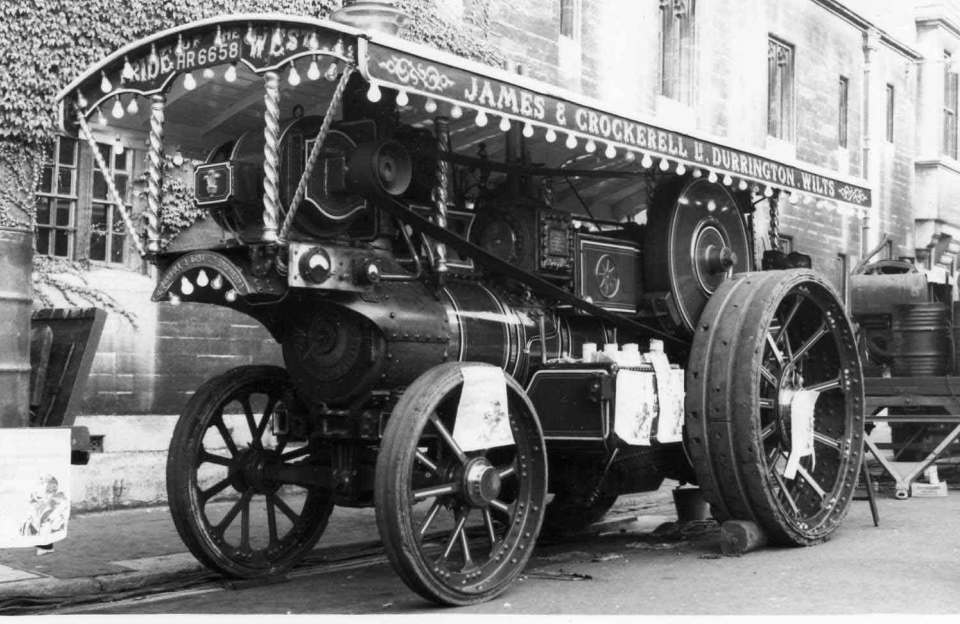 The Prince of Wales, photograph courtesy of Chris Barber, Son of Peter Barber.

History of Steam in Durrington, Wiltshire 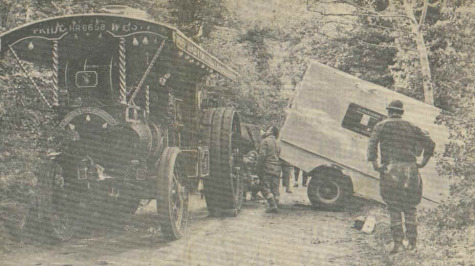 Prince of Wales with Peter Barber & Bob Bailey as crew, from James & Crockerell recover a crashed bakers van in the Woodford Valley.

This civil engineering company owned and operated a fleet of steam rollers for the road making and surface compaction parts of their contracts.  Through the experience gained over many years of maintenance and refurbishment of their own plant, they developed a niche market for this type of work for a variety of new owners in the early days of steam engine preservation.  Mr. N Bailey of Bulford, Wiltshire states that, by the early 1960s they had already completed more than 15 reboxings with related work and ultimately by the 1970s when they ceased trading, this figure had tripled.  Complete boilers were also made for 10" scale rail locomotives.  Additionally, in their own right, James and Crockerell had entered the preservation era by purchasing the Burrell scenic S.R.L. 'Prince Of Wales' 3887 which they had also reboxed.

By 1981 ‘Lord Lascelles’ was 60 years old.  From the preservation point of view events have not been kind to 'Lord Lascelles'.  Eighteen years of hard showland use were terminated by the outbreak of war in 1939, however, it had endured a further 25 years either laid up in various yards or scattered about in pieces.  It was only in 1964 when the late Steve W. Neville took possession of the pieces that its future looked promising.

After reassembly etc by James and Crockerell it was extensively steamed in preservation by Steve until 1980 when it was sold to the present owner.  We should not be misled into thinking that Steve's interpretation of preservation was an easy option; for he drove ‘Lord Lascelles’ almost as hard and long as it has been in showland use.

The new owner decided that this ‘scenic’ Burrell, their foremost model, now deserved an exceptional effort to completely restore it to near new condition.  Starting with the advantage of a lifetimes experience in machine construction and practiced in all the engineering processes involved, Richard Marsh commenced the rebuild in 1981.

The firebox and boiler were confirmed sound as expected, except for minor remedial work in the smoke box.  Otherwise the whole road loco was dismantled down to its component parts.  Every piece was checked for authenticity and inspected for damage and wear to support the decision to restore or remake it.  Bushes, journals, slides and keyways and the like were all checked and as necessary restored to legitimate fits before reassembly.

Copies of every preserved Burrell drawing relevant to scenic models were obtained in order to check and keep details authentic.  Missing information was pieced together by correspondence, research and the help of fellow enthusiasts .  Some of the tasks were challenging and time consuming, frequently requiring the construction of special equipment so that various engineering processes could be carried out on a home workshop site.  The hind wheels were dismantled, re plated, re straked and re riveted.  Then, after re machining the brake rim diameters, the bores and outside diameter of the strakes to restore concentricity, they were re tyred using Dunlop fork truck tyres.

These needed to be cut, opened to a bigger radius and joined together again into larger endless hoops before pressing onto the wheels. This latter process very much stiffened the whole wheel construction.  Cylinder bores were honed, new crosshead guides made which were carefully lined up and squared to the crankshaft and cylinder bores.  All link pin and motion bores were honed and repinned, including hand lapping the quadrant slots to remove wear and making new quadrant blocks to suit.  The hind axle, front axle and second shaft were all replaced but only after rebushing and in line boring the axle, second shaft, crank shaft, brake shaft and boiler feed pump drive bores in situ.  All spur gears, compensating bevels (now known as differential bevels) and steering worm and wheel were either built up prior to recutting or renewed and splines were restored to reasonable fits by electro-plating and lapping. The high gear spline flights and root diameter were reground in position after making special equipment for the task and before fitting the replacement high gear drive pinion.

Whilst the mechanical and electrical rebuilding tasks absorbed the majority of the 19,000 hours necessary for the whole job, the work to derust and restore pitted surfaces to the standard attained for a Burrell class 'A' show finish certainly occupied 10 to 15% of this time.

Areas considered at risk from future rusting were blasted and hot zinc metal sprayed prior to painting (the best anti-corrosive pre-paint treatment known.).  By far the most time consuming tasks on the paint finishing process was the elimination of corrosion and bruising especially on the riveted wheels.  Various paints were used to good effect on finish coats. These included Tecaloid, Taylors Epifast, Thornley & Knight and Masons Brush Varnish.  The painted surfaces at year 2000 are now on average 12 years old. Their present condition is proof that time taken in careful preparation prior to final coats is justified in the long term.

Excluding only the gilding and lining, all the work has been undertaken by the engineer owner and his helpers in a purpose built home workshop or to his detailed instructions.

Having completed extensive shed testing under steam, "Lord Lascelles", finally emerged from its workshop on 13th April 1993, its 72nd birthday after a 12 year rebuild.

Whenever the opportunity and time permits it is now driven under its own steam on public roads. Single runs up to 35 miles to and from its hilly Pennine home base are made at comfortable open road speeds of 12 mph, (its legal limit) to average about 8mph over typical journeys, excluding stops.